TORONTO, ON – The Alley Theatre Workshop (ATW) is proud to present Eugene O’Neill’s Hughie at The Theatre Centre in Toronto. The rarely performed 45 minute two-character, one-act play has been 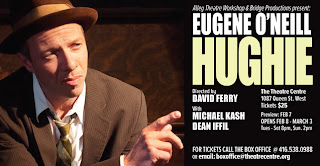 performed on Broadway and on internationally-renowned stages around the world. This will mark the first time Hughie has been performed as a single bill in Canada and will run from February 7 to March 3, 2012.

Hughie stars Dora-nominated actor and ATW Artistic Director, Michael Kash (Pounding Nails in the Floor With My Forehead, Where's My Money), in the role of small-time hustler Erie Smith. L. Dean Ifill (Basil "Bronco" Davis on the original Degrassi High) will play Charlie Hughes, the hotel’s night clerk, who has recently replaced the titular Hughie. Dora Award-winning, David Ferry directs the play, which is set in the lobby of a seedy New York City hotel. Hughie details the interaction between Kash’s eccentric Smith and Collins’ Hughes, as Smith laments the 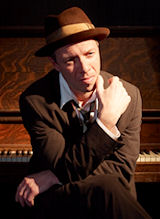 “We are pleased to be bringing the production of Hughie to Toronto for the first time,” says Kash. “As part of our ongoing initiative to give back to the community, we will be donating a portion of the proceeds to Anaphylaxis Canada. We are looking forward to working with the organization as a partner in both awareness and the community.”

• ATW will also host a dedicated performance of Hughie on February 20 and donate a portion of ticket sale proceeds to support Anaphylaxis Canada.
• Tickets for this special performance range from $50 to $100, and will include an intimate reception with the cast and crew following the show.

About Hughie:
Hughie was written by Eugene O’Neill in 1942. It made its Broadway debut in 1964, earning a Tony Award nomination for Jason Robards in the role of Erie Smith. More recently, the production earned attention for the 1996 Broadway revival directed by and starring Al Pacino. The show revolves around Charlie Hughes, the hotel night clerk, and Erie Smith, an alcoholic gambler who has spent his last fifteen years at the hotel. Smith embarks on a bender, prompted by the death of Hughie, the previous clerk. Hughes listens to this study in fraudulent glibness which is touching, revealing and a telling measure of what is behind Smith’s delusions.
dora nominated actor eugene o'neill the theatre centre toronto toronto theatre scene