All canadian cast in coc’s canadian premiere of SAARIAHO’S LOVE FROM AFAR, one of the 21st Century’s great operas
February 2 - 22, 2012 at the Four Seasons Centre, Toronto 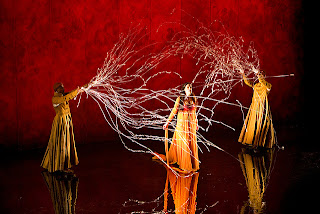 that has become one of the most performed and successful operas composed of this century.  This new COC production is helmed by COC Music Director Johannes Debus and visionary director Daniele Finzi Pasca, and features an all-Canadian cast of voices both familiar and new to the COC stage: baritone Russell Braun, soprano Erin Wall and mezzo-soprano Krisztina Szabó.  Sung in French with English SURTITLES™, Love from Afar runs for eight performances at the Four Seasons Centre for the Performing Arts on Feb. 2, 4, 8, 10, 12, 14, 18 and 22, 2012.

Since the opera’s premiere in 2000 at the Salzburg Festival, Love from Afar has captivated audiences worldwide with performances at Théâtre du Châtelet, Sante Fe Opera, Stadttheater Bern, Finnish National Opera, the Bergen International Festival, English National Opera and Vlaamse Opera.  Arguably the greatest opera of the 21st century, it has been praised as a “haunting and resonant work... transfixing and utterly distinguished” by the New York Times.

Love from Afar tells the story of a world-weary troubadour from France who carries on a long-distance love affair with a beautiful woman living in Tripoli.  Although they never see or speak to each other, their feelings develop and grow through the efforts of an enigmatic Pilgrim, who carries messages of love and yearning between the two.  Saariaho drew her inspiration for the work from the life and song texts of Jaufré Rudel, a French prince and troubadour of the 12th century, who often wrote of his obsessive love for an ideal, unattainable woman and whether such a love is best preserved from afar.  The resulting work is a 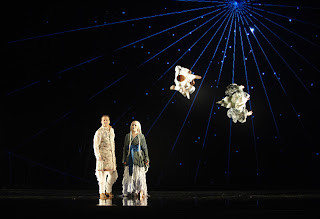 melding of medieval musings with the sounds of the modern age.

On the heels of his acclaimed performance in the COC’s Iphigenia in Tauris last fall, internationally renowned lyric baritone Russell Braun returns to the company as the troubadour Jaufré Rudel.  Erin Wall, one of the most exciting young sopranos on the current operatic scene with recent engagements at the Metropolitan Opera, Lyric Opera of Chicago and Bayerische Staatsoper, makes her COC debut as Jaufré’s faraway desire, Clémence.  The mysterious Pilgrim is sung by mezzo-soprano Krisztina Szabó, who has captivated audiences across North America and Europe since graduating from the COC Ensemble Studio in 2001.  She most recently appeared with the COC as Idamante in 2010’s Idomeneo.

The COC production is presented by Daniele Finzi Pasca, best known for his work with Cirque du Soleil’s Corteo and the creation of the closing ceremonies of the XX Olympic Winter Games in Torino in 2006.  In Love from Afar, Finzi Pasca also serves as lighting designer, working with set designer Jean Rabasse and costume designer Kevin Pollard.  He brings his signature style to a visually arresting new production that uses innovative Cirque-like techniques to extend the range of effects possible on stage.  Acrobats gliding through the air, backgrounds of silk and coloured lights, and costumes with seemingly endless silken 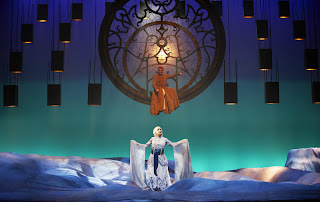 Johannes Debus leads the COC Orchestra and Chorus through Saariaho’s lushly orchestrated score.  The composer has created a rich tapestry of sound using innovative combinations of traditional instrumental sections with electronics.  Among the more unusual instruments used in Love from Afar’s orchestration are an o-daiko (a Japanese taiko drum), glass and shell chimes, and a synthesizer to trigger electronic soundscape effects.