Marimba Explosion is the debut independent album by Zimbabwean-Canadian group the Resolutionaries Marimba Band.  Recorded in Peterborough, ON by engineer James McKenty (The Spades), the album is a 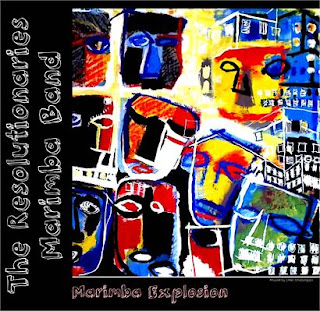 The band was formed in 2010 by sculptor and educator Chaka Chikodzi, who brought together Trent University youths who participated in his local arts organization Africville Dandaro Centre.  The Centre runs African art and music workshops, with an aim to foster acceptance and appreciation of difference in the community, and attracts young aspiring artists from all across Ontario.  Africville’s annual Black History Month event has become a staple in the Peterborough community.

On this album, Chikodzi focuses on the marimba, a traditional Zimbabwean instrument that combines sweet melodies with African rhythms.  Traditional songs from this album include “Taireva” and “Manhanga”, a celebration of sweet pumpkins, executed in a triple-fire pap-pap-pap rhythm.  The group offers a hot new blend of hybrid Zimbabwean music that has set dance floors ablaze with their energetic live shows, featuring traditional costumed dancers on stage.

Marimba Explosion was officially be launched on February 11th, 2012 and will be available at select stores and through the band’s website.