TriBeCaStan: News Alert. This morning Aljazzeera reported that the questionable nation of TriBeCaStan (www.tribecastan.tv) has made scientific breakthroughs in time travel. The unrecognized republic of nomads has broken the code of the time/space continuum. And by broken we mean: it no longer works. Applying 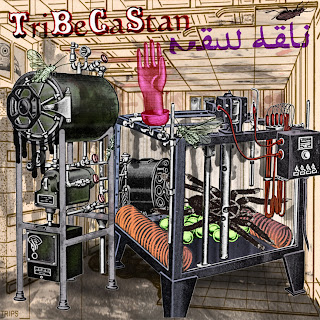 sonic techniques once only known to a small group of punk rock shamans, the nation's most prestigious scientific entity, the TriBeCaStani FolkLorkEstra, uses sound alone to simultaneously place listeners in eras separated by decades and terrains separated by oceans. The breakthrough is outlined in an auditory compendium titled New Deli (distributed by the state-run EverGreene Music, set for release February 7, 2012), a recording that allows the world to experience a type of soulful networking more insidious than Facebook's privacy policies.

To fully grasp TriBeCaStan's methodology, one must note the movements of the commonwealth's Minister of Foreign Expatriation Jeff Greene and Archduke of the Forward Guard John Kruth.

Kruth--the sonic engineer and composer of the melodic formulas concocted for New Deli--carried out extensive research with auditory specialists among Bosnian Gypsies, Indians, and Moroccans, while Greene conducted top secret junkets to Western China, Cuba, and Uzbekistan collecting artifacts key to the timbral sound bending necessary to achieve dimensional shifts. Research by the two culminated in their participation in the 2011 International Jews Harp Congress (sic) in the diamond and permafrost capital of Russia, Yakutsk. The Congress broke the record for most jews harps played at once, while the TriBeCaStan delegates broke wind on the stage of the Yakutsk Opera House, with their jews harps.

The plot thickens when one realizes that it is the double-spy tendency of these two former rebels which led to the new discovery. After the revolution, Parliament decided that rather than changing governments every few years, they would do so intentionally every few weeks, creating more instability than even a coup could 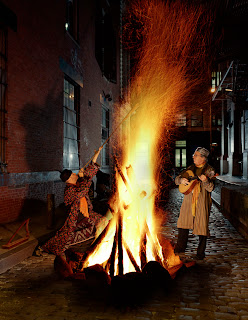 handle. Thus all government leaders are forced to spend three weeks out of every six weeks in New York City's subways, bars, and, most importantly and considered most sacred, spice-filled delis. One mythical deli in particular inspired the re-naming of the nation's capital to New Deli.

A revolving door of temporarily expatriated patriots led to the swelling ranks of the Folklorkestra. “Everywhere I go, the musicians I meet want to hear and play American music, particularly, blues and country," says Kruth as he smokes dates and eats tobacco. "Musicians all over the world listened to Curtis Mayfield and the Temptations. But for the last decade or two the shoe has been on the other foot. We’ve not only been inspired by world-class global musicians like Bachir Attar of the Master Musicians of Jajouka, Carnatic mandolin master U. Rajesh, and the Austrian hurdy-gurdy virtuoso Mathias Loibner, we invited them to play as guests on New Deli.”

"As we say in TriBeCaStan," adds Greene, "'If your toes all face one way, you will walk crooked.' This means we must be in solidarity with all of the world to find the right direction. If you dig around in the '60s and '70s in music from India, Thailand and Ethiopia you hear how the musicians borrowed from and reworked American music. We’re just doing the same thing, but in reverse."

With the addition of baritone saxophonist Claire Daly, a former James Brown and Taj Mahal side woman and a fave of both the Downbeat poll and former President Clinton, along with John Turner's versatile ska 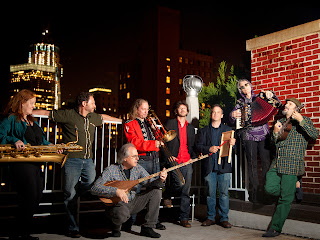 trumpet tossed into the mix, the band digs deep into an eclectic '60’s bag covering Ornette Coleman, Rahsaan Roland Kirk, and Don Cherry. Kirk is the subject of Kruth’s first biography, Bright Moments, and composer of the funky “Freaks for the Festival,” which TriBeCaStan recorded live at Bill Laswell’s studio with Kirk alumni Steve Turre blowing a massive trombone solo.