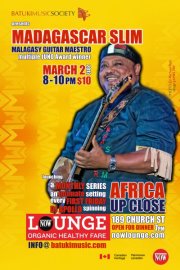 TORONTO - AFRICA UP CLOSE is a series of concerts that would exclusively take place at the NOW Lounge, a cozy room that holds a maximum of eighty people. This is an opportunity for the audience to experience music in an intimate setting, as well as interact with the artists. You will not only enjoy the music and ambient atmosphere but also be able to eat healthy, organic, and locally sourced food from the NOW Lounge’s kitchen.

MADAGASCAR SLIM
Randriamananjara Radofa Besata Jean Longin is a Canadian Malagasy folk and blues guitarist who records and performs under the stage name Madagascar Slim. Slim was inspired by the music of Jimi Hendrix and B. B. King. He came to Canada in the late 70’s to study, and while pursuing his academic career at Senecca College, he also joined La Ridaine, a French Canadian folk group of which he was a founding member. 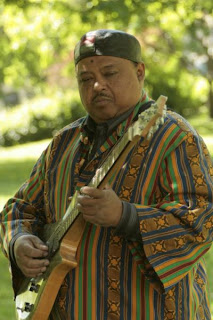 Slim is a member of the roots and traditional band Tri-Continental, and the African Guitar Summit, as well as a solo artist. He is a three-time JUNO winner; winning in the categories of World Music Album of the Year (2000), for his solo album ‘Omnisource’, Roots and Traditional Album of the Year (2001), with Tri-Continental, and the super group African Guitar Summit in 2005 World Music Album of the Year. Slim’s latest recording, ‘Good Life Good Living’, released in 2009 is a labour of love that took him a couple of years to craft.

If you love the blues, traditional Malagasy folk and contemporary African music, then don’t miss Slim’s performance. DJ APOLLO will be spinning his diverse collection of popular African hits between sets.