Now Available on DVD in the USA: Abdoulaye Dao's Comedy An Uncommon Woman 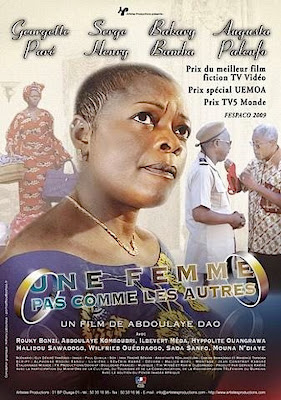 DVD in the USA.

Mina is tired of her husband's infidelity and decides to take a drastic decision: She takes a second husband.

Based on his conversations with women involved in polygamist relationships, he illustrates - to very funny effects - the daily life of two persons - in this case two men - who share a spouse.  On a comedic tone, Abdoulaye Dao tells us a story of jealousy, infidelity, romance and revenge.

An Uncommon Woman-Une Femme Pas Comme Les Autres- was a success in its native Burkina Faso and is cast with some the best actors of Burkinabe cinema.

Abdoulaye Dao was born in Burkina Faso. He studied at the Institut african d'éducation cinématographique in Ouagadougou and then at INA-Institut National Audivisuel - in France. He is the director of the series Quand les elephants se battent that received the Grand Prix for a Best TV Series in FESPACO 2007.