Potted Potter at the Panasonic Toronto - Continues to March 25

Toronto, ON – Starvox Entertainment and Potted Productions are proud to introduce Potted Potter: The Unauthorized Harry Experience – A Parody by Dan and Jeff to Canadian audiences. This Monty Python-esque show sold out theatres across London, Edinburgh, Australia and New Zealand, and will now

make its North American debut on February 14, 2012 at the Panasonic Theatre for a two-week run.

Written and performed by Olivier Award-nominated actors Daniel Clarkson and Jefferson Turner, the play takes on the ultimate challenge of condensing, or “potting”, all seven Harry Potter books into seventy madcap minutes. The two former Children’s BBC hosts are aided by multiple costume changes, brilliant songs, ridiculous props and a generous helping of Hogwarts magic. The show also invites audiences to engage with a real life game of Quidditch, but according to Clarkson and Turner’s unique set of rules.

“We can't wait to bring the show to Toronto, it'll be our first time performing in North America and we can't think of a better place than Canada to continue our tour,” said Clarkson and Turner. 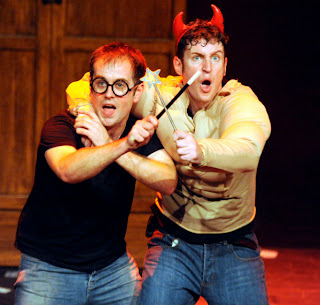 “Inventive, daft fun for all the family that doesn’t feel the slightest bit cynical,” praised Lyn Gardner of The Guardian. “A winner in every way.”

Whether you camped outside a bookstore for three days awaiting the release of the Deathly Hallows or you don’t know the difference between a horcrux and a Hufflepuff, the comedy, magic and mayhem of Potted Potter makes for an entertaining and hilarious visit to the theatre. The fast-paced show, which has made audiences aged six to Dumbledore (who is very old indeed) roar with laughter all over the world, is suitable for the whole family, including grown-ups, Muggles and Squibs.

“We are delighted to introduce this brilliant, hilarious show to North American audiences,” said Corey Ross, president of Starvox Entertainment. “Potted Potter is a wonderfully entertaining time for both fans and neophytes of the Harry Potter phenomenon alike.”

With this production, Clarkson and Turner earned widespread acclaim and a fan base that crosses three generations. It played five sold-out Fringe seasons in Edinburgh, five sold-out London runs and extensive U.K. and international tours. This is the first time Potted Potter has been performed in North America. The show has received rave reviews from The Guardian, The Daily Telegraph, Sunday Express, Daily Mail, Evening Standard and the Financial Times, as well as being a Time Out Critic’s Choice in London in 2011.