NEW YORK CITY - This season, desire is taking on a whole new rhythm as the greatest play from America's most celebrated playwright sizzles onto the stage at The Broadhurst Theatre. 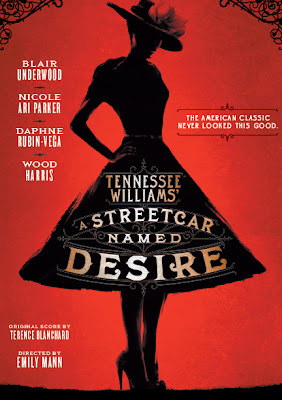 DuBois, Daphne Rubin-Vega (Rent) as Stella Kowalski and Wood Harris ("The Wire") as Mitch. Directed by Emily Mann (Artistic Director of Princeton's esteemed McCarter Theatre) and featuring an original score by 5-time Grammy Award winner Terence Blanchard, this scintillating Streetcar brings a whole new rhythm to Williams's enduring portrait of sex, class and secrets in one of America's most fascinating and diverse cities. Come and feel the heat.

Blair Underwood (Stanley) has distinguished himself as an award-winning actor/director/producer who continues to showcase his multitude of talents in the world of film, television, theatre and literature. Underwood most recently starred as the President of the United States in the NBC drama "The Event," and co-starred in the independent drama film "Homework" (Fox Searchlight) opposite Emma Roberts and Freddy Highmore.

Nicole Ari Parker (Blanche DuBois) has been featured in Touchstone Picture's Remember the Titans, Welcome Home, Roscoe Jenkins with Martin Lawrence, Boogie Nights with Mark Wahlberg, the HBO original film Dancing in September and opposite Taye Diggs in Fox Searchlight's Brown Sugar. She is best known for her outstanding performance as Teri Joseph of Showtime's award-winning Soul Food and has displayed her acting range in several blockbuster films.

Daphne Rubin-Vega (Stella) is a two-time Tony and Drama Desk nominee and recipient of Theater World, Obie, Blockbuster awards, and was recently nominated for an Independent Spirit Award for her role in Jack Goes Boating. She has been a member of the Labyrinth Theater Company since 1992. Ms. Rubin-Vega is perhaps best known for the roles she originated, including Mimi (Rent) and Conchita (Anna in the Tropics), both Pulitzer Prize-winning Broadway shows.

Wood Harris (Mitch) a native of Chicago, holds a B.A. in Theatre Arts from Northern Illinois University. He also holds a Master of Fine Arts degree from New York University, Graduate Acting Program, Tisch School of the Arts. A polished actor adept at a broad array of parts and types, Harris landed his first role in Jeff Pollack's urban-themed sports drama Above the Rim, starring opposite the late Tupac Shakur, Marlon Wayans, and Duane Martin.