Toronto - The UK's multiple award-winning Theatre Ad Infinitum expands its innovative and international theatre-making with the launch of Theatre Ad Infinitum Canada, the Canadian arm of this Lecoq-trained company known for its ambitious, highly acclaimed physical productions. Under the artistic direction of Amy

Nostbakken, Theatre Ad Infinitum Canada operates independently as well as with its sister company in the UK, led by co-artistic directors Nir Paldi and George Mann.

The inaugural presentation of Theatre Ad Infinitum Canada, in association with Why Not Theatre, is the Canadian premiere of The Big Smoke, a one-woman a cappella performance by Amy Nostbakken, co-written by Nostbakken and director Nir Paldi. Inspired by the lives of Virginia Woolf, Sylvia Plath and Anne Sexton, this poetic waltz with death opens February 22, 2012 and runs to March 4 at Factory Studio Theatre, with a preview on February 21.

The Big Smoke won an Argus Angel Award at the 2011 Brighton Festival Fringe, and Nostbakken was nominated for Best Female Performer in the Latest Awards by Brighton's Latest 7 magazine. It premiered to rave reviews at the 2010 Edinburgh Festival Fringe, leading to a national tour of Britain in spring/summer 2011 that included stops in London, Manchester, Liverpool, Oxford and Leeds.

In a courageous physical performance with a completely original text and score sung a cappella, Amy Nostbakken's nuanced voice tells the story of a brilliant young artist from Toronto given the opportunity of a 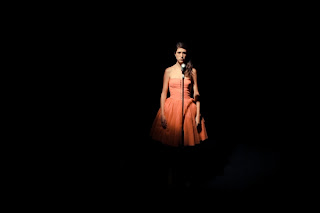 lifetime: a solo exhibit at London's Tate Modern. Nathalie has everything to live for: good looks, talent, a loving family, amazing scholarships and a career just waiting to take off. But just as she is rising to the heights of her potential, she begins to spiral down into the depths of depression. Through swanky gallery parties and grim pub toilets, ex-boyfriends and meddling aunts, mauled dogs and crashed cyclists, her descent into madness unfolds. The Big Smoke is a stunning experience that walks the fine line between sanity and psychosis.

Amy Nostbakken (co-writer, composer, performer The Big Smoke) is a writer, performer and musician based in Canada whose credits include Theatre Ad Infinitum's First Class, a play she wrote and performed in which met with great success at the 2009 Edinburgh Festival Fringe, and productions with the UK's Pleasance Theatre and Young Vic, among others.