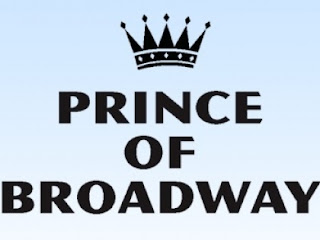 forgo the pre-Broadway engagement in Toronto.

“As PRINCE OF BROADWAY has developed over the past year, we have come to the conclusion that the show must go directly to Broadway,” said Aubrey Dan, President, Dancap Productions. “Over the past year, the scale of the show has grown so considerably that the costs of a pre-Broadway try-out no longer make financial sense. While we are of course disappointed that the production won’t premiere in Toronto, the financial implications coupled with the creative team and acting company schedules necessitated this revised plan to open directly on Broadway.”

Celebrating one of the most influential and successful careers in the American theatre of the past 60 years, PRINCE OF BROADWAY will look at the circumstances and fortune, both good and bad, that led to Hal Prince creating some of the most enduring and beloved theatre of all time, including The Pajama Game, West Side Story, Fiorello!, Fiddler on the Roof, Cabaret, Company, Follies, A Little Night Music, Sweeney Todd, Evita, and The Phantom of the Opera, the longest-running show in Broadway history.

Mr. Prince said, “Happily, Susan Stroman is co-directing with me and David Thompson is the writer of the book for a cast of my favorite performers, most of whom I’ve worked with numerous times. I’ll miss opening in Toronto because that city has been very good to me on many occasions. But hopefully,

Torontonians will visit us in New York and, if things turn out as well as we wish, we’ll visit them subsequently.”

PRINCE OF BROADWAY will feature words and music from the shows that have earned Hal Prince a record 21 Tony Awards.

Launched only 5 years ago, in 2007, by Aubrey Dan, DANCAP PRODUCTIONS INC. is a Tony Award®-winning commercial theatre company based in Toronto, Ontario, Canada.  DANCAP is dedicated to producing and presenting the very best of Broadway-style theatre, created in collaboration with acclaimed artists and award-winning creative teams.

International and Broadway credits include The Addams Family, Memphis, Ghost the Musical, Wicked,

Come Fly Away, Tom Stoppard's Rock 'n' Roll, [Title of Show], Cat on a Hot Tin Roof, West Side Story, A Little Night Music, In The Heights and Jersey Boys.


Dancap is proud to be the lead producer of Prince of Broadway, a celebration of the legendary director and producer, Harold “Hal” Prince, opening on Broadway in November 2012. The 2012 Dancap Series includes presentations of American Idiot, In The Heights, Shrek The Musical, West Side Story, Disney’s Beauty And The Beast, Million Dollar Quartet and A Christmas Story.
www.DancapTickets.com
broadway opening dancap musical theatre theatre in new york city theatre news toronto theatre producer