TheatreRUN presents the world premiere of
The Double
An original adaptation of Fyodor Dostoevsky's classic comic-neurotic-thriller
Two actors and one musician with a double bass collide in a schizophrenic feast of site and sound
February 2- 19, 2012 at Factory Theatre Toronto 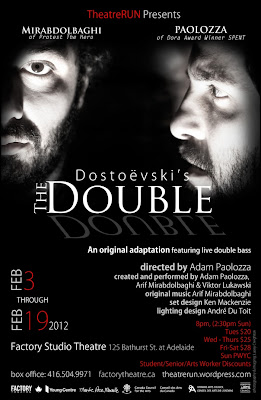 Fyodor Dostoevsky's novella of the same name. Conceived, created and performed by Artistic Director Adam Paolozza (who also directs) and Arif Mirabdolbaghi, bass-player and lyricist of the award-winning Canadian Metal band Protest The Hero, The Double combines physical theatre, mime and music for a jazzy exploration of alienation and paranoia. A dark comedic satire about our deepest fears of losing our identity, The Double previews February 2, opens February 3 and runs to February 19 at Factory Studio Theatre.

Dostoevsky's brilliant prose, mixed with a quirky original adaptation featuring live music, provides a hilarious (and painfully accurate) cautionary tale about one man's desperate attempts to fit in with a grotesque society and his gradual descent into madness when this fails.

The Double speaks to our own fragile hold on reality in a time when our identity is as fluid as our facebook and twitter profiles allow. Mr. Golyadkin (whose name literally means "poor-fellow"), a St Petersburg government clerk, is a man persecuted by his own personal neuroses. His worst fears are soon realized when another, more devious Mr Golyadkin, appears on the scene spinning his life out of control. This other Mr. Golyadkin is so alike in every way to our hero Mr. Golyadkin, such a perfect physical likeness, that you might even say he was his...Double!

First developed as part of Theatre Passe Muraille's BUZZ Festival where it was a smash hit, The Double mixes elements of vaudeville and a jazzy double bass in a comedic molotov cocktail filled with laughter and paranoia. Audiences will laugh...and then cringe!

Paolozza's TheatreRUN is co-creator (with Why Not Theatre and Theatre Smith Gilmour) of the internationally acclaimed hit show Spent, nominated for three Dora Mavor Moore Awards, and winning for Outstanding Performance in a Featured Role (to both Paolozza and Ravi Jain). Spent played two nearly sold-out runs at Factory Theatre before playing a sold-out run at the Young Centre and a 4-week sold out run at the Edinburgh International Fringe Festival. Spent plays a limited run in New York City in the spring.

TheatreRUN has been recognized as part of the next generation of exciting and physically innovative theatre creators whose original, highly physical, imagistic work has been produced in French and English - in Canada, Scotland, France, USA, China and India. As noted above, it co-created the award-winning Spent for which Paolozza won a Dora Mavor Moore Award.

Arif Mirabdolbaghi is an exciting up-and-coming Canadian music star with the progressive-rock outfit Protest The Hero, whose accolades include a #1 album, Juno nomination, certified Canadian gold DVD, several CMW awards and extensive touring all across North America, Europe and Asia.

Joining Paolozza and Mirabdolbaghi on stage in The Double is co-creator Viktor Lukawski who, like Paolozza, is a graduate of École Internationale de Théâtre Jacques Lecoq in Paris, France. While abroad, he performed and developed new works in France, the UK and Poland, and became a member of the English theatre company Wet Picnic. 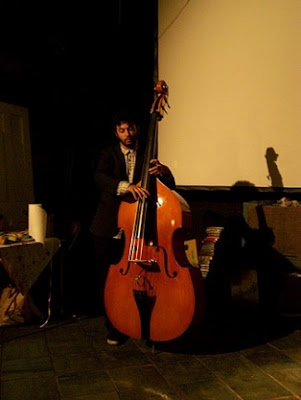