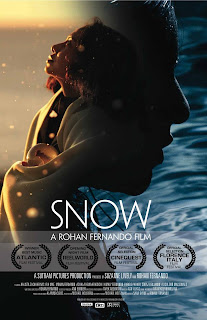 Snow is a beautifully shot movie that takes a nuanced look at the experiences of a new Canadian immigrant through the eyes of Parvati, a young Sri Lankan woman who loses both her family and her home in the Boxing Day tsumani of 2004.

She arrives in Canada to live with her aunt and uncle, left to navigate her way through the newly strange - and strangely cold - landscape of Southern Ontario suburbia. Parvati takes a dismal job cleaning rooms in a hotel and dutifully meets the nice young man her relatives are eager to marry her off to. It's the connections she makes on her own, however, with a troubled tenant of the hotel and a homeless woman, who lead her out of the traditional enclave of her aunt and uncle's home and on the road to Nova Scotia.

The characters and their relationships are nicely complicated and have a realistic feel that goes along with documentary-style camera work. It's artfully shot, however, to appear so nonchalant, using close ups and an artistic sense of composition to add drama to the scenes set in suburban domesticity and generic chain hotel 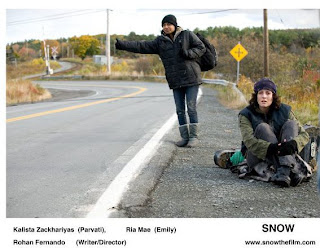 Solid acting all around fleshes out a well written script, anchored by Kalista Zackhariyas in the role of Parvati - or Kala, as she comes to call herself after the sister who slipped from her hands into the churning waters of the tsunami. The dialogue is often sparse, the story resting on her expressive eyes and whole demeanour. She physically embodies the role in a way that's entirely convincing.

This is a story about loss, Parvati's move halfway across the world mirroring the displacement of her whole foundation in life. In a way that feels real and offers no pat answers, Parvati's story ends with the notion that where there is still breath, there can still be hope at the end of the tunnel.

All images by Holly Crooks 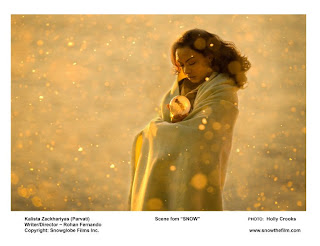