NEW YORK CITY - In celebration of Women’s History Month, The Riverside Theatre — in partnership with City University of New York (CUNY) — will host its Third Annual Evening with 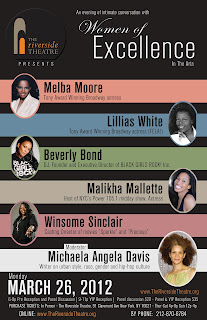 Women of Excellence in the Arts event, acknowledging the profound contribution that women have made in entertainment and their anticipation of greater empowerment, involvement, and impact on the nation.  The town hall-style program will take place on Monday, March 26, 7:00 p.m. - 9:00 p.m. at the Theatre, located in the historic Riverside Church, 91 Claremont Ave. (bet. 120th & 122nd St.), Morningside Heights.

• Doors open at 6:00 p.m. sharp and tickets are $20.00 for the panel discussion only, $35.00 for the panel discussion and special VIP reception.
• The VIP reception will include hors d’oeuvres, dessert and refreshments.
• Tickets may be purchased at The Riverside Theatre box office, by phone at 212-870-6784 or online.
• All proceeds will help support the Theatre’s programs.

Originally named the Cloister Theatre, The Riverside Theatre — founded in 1960 and located at the historic Riverside Church — produces work that promotes and deepens cultural and social awareness.  Highlights from the previous seasons have included: the Katherine Dunham Tribute; the Clark Terry Tribute hosted by the late Ossie Davis, with special guests Bill Cosby, Arturo Sandoval, Dianne Reeves, Nicholas Payton and Jon Faddis; and the screening of The Rise & Fall of Jim Crow, in collaboration with Thirteen WNET.