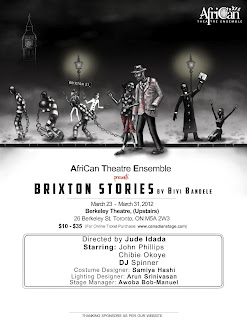 but also the stories of music and energy as only a DJ can tell them. DJ Spinner, a 28 year veteran DJ makes his acting debut in Brixton Stories.

In this play about the short and happy life of Ossie Jones a father revives from a fifteen year coma. What follows is a reunion with his daughter that happens in a most dramatic journey into the world of magical realism. With the aid of metaphor, allegory, mime, pulsating lighting, Brixton Stories’ use of dance, music and quintessential acting courtesy of the tantalizing John Phillips and the amazing Chibie Okoye on her debut theatre performance as well, take us on a journey.

In this journey, Bandele explores the thin line between reality and fantasy even as he provides an exposé of the normal goings on in the neighbourhood known as Brixton, a borough in the City of London located in South London, England. Brixton Stories provides a scintillating spectacle that will leave the viewer calling out for an encore.