[Toronto ON]  It’s a Sures thing. Toronto audiences will be treated to the wild and wry musical offerings of John Lennon Songwriting Award & ISC winner, Ben Sures, who releases his CD, Gone 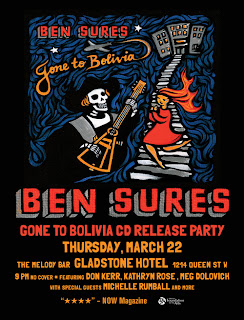 To Bolivia, at the legendary Gladstone Hotel (Melody Bar) on March 22!

Who is Ben Sures, you may ask?  He’s the kid you hung out with during recess at grade school – or wanted to. Because he was hilarious. Not in the traditional funnyman role – but as unconventional as all get out. He made life fun with his quirky observations on all things ridiculous – targeting those things that appear as normal to the rest of the world. His uncanny gift for observation exposed you to the art of looking at things differently. And it became a drug. He made you laugh as he raised your standards for what to expect. And, all these years later, you were never sure what became of such a character.

Apparently, he moved to Edmonton when he wasn’t in Toronto, Montreal, Vancouver or Winnipeg – calling half the country his home. He became a musician, released six albums– and gathering a full head of steam. All for the same reasons that made him so popular as a kid.

He’s still a kid, yet he’s got grown-up ambitions. Hardly the protagonist in his tales, he’s all about bringing important issues to our collective attention through his lyrics. And, with some 20 years of experience under his belt, he’s still as quirky as you remember. Gone to Bolivia serves up 13 songs with topics covering a scope beyond that of the old schoolyard. From the global and historical perspective afforded by first-person tales from the deck of a cruise ship to the impact of poverty and humankind’s surprisingly two-faced approach to becoming a part of the solution, Sures imparts acute life lessons.

Nothing much is as it appears – nor is there any need to impart major political statements. You fill in your own blanks while Sures and well-known Rheostatics producer Don Kerr concentrate on a lush backdrop of interesting and complementary instrumentation, including acoustic and electric guitars, piano, pedal steel, strings and the delicate backup harmonies of Michelle Rumball, Rhonda Stakich, Kathryn Rose, Good Lovelies’ Kerri Ough and Caroline Brooks. Mix in other high profile players like Tim Bovaconti (Ron Sexsmith) together with members of the Creaking Tree String Quartet, and you 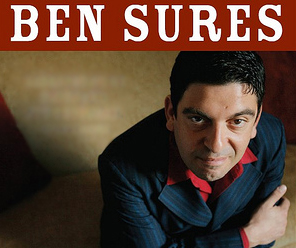 have an offering whose musical sweep is beyond compare.

Sures also has plenty of time for the past – “High School Steps”, with its tales of early love, listening to the Kinks and the silly ideals of youth. And the title track – its punkish attack and driving beat underlining its larger theme of the personal cost of personal human sacrifice in the context of revolution for the masses. “Everybody Matters” is surprisingly simple, yet reveals an emotionally-charged message. He’s our conscience throughout – no easy feat, even on a suave cover of Mose Allison’s insightful “Everybody’s Crying Mercy”.

'In Burma' you’ll hear some of the most off-beat humour that is as cutting as Loudon Wainwright III, as well as guitar-work that is rich and resonant.

Indeed, Sures’ playing has moved front and centre on this release as he’s also becoming known as a powerful player to have in the scrum, being hand-picked to support such artists as Paul Reddick, Rita Chiarelli and the Wyrds.

Little wonder Sures has secured such prestigious awards. His material comes from a special place and what may seem like pleasing folk-pop actually packs a lyrical and melodic punch that keeps on punching, long after the music’s over.

Say hello to your long-lost friend whose schoolyard musings now encompass a whole world of joy, sadness and everything-in-between, as can only be observed by a true character who has never lost the gift of observation and seeing things differently.