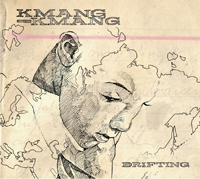 “The most important thing is that it’s viscerally powerful,” states Barmey Ung, the classically trained guitarist and composer behind Chicago’s avant acoustic rock collective, Kmang Kmang.“I don’t like to intellectualize things too much, and don’t like to attach meanings where there doesn’t have to be meanings. I just want the music to be aesthetically powerful.”

For Ung, the power comes from a slowly distilled mix of his musical passions: the subtle force of the classical guitar tradition, the sounds of Spain and Brazil, his emerging understanding of his roots as a Cambodian-American. The results engage and scintillate on Drifting(March 30, 2012), a post-rock, jazz-inflected dismantling of indie songwriting to create emotional, complex songs without words. 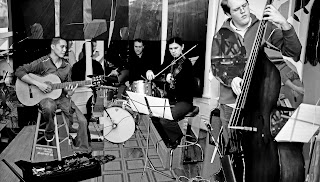 The band’s multifarious, multifaceted creativity will be in full force March 31, 2012 at the Painted Door for a multisensory album release show. The core of Kmang Kmang will be joined by the boundary-challenging chamber brass of the Gaudete Brass Quintetwho will also premiere a new commissioned work composed by Ung.  The event will also feature a video collaboration between Ung and contemporary dancer Kate Puckett, and creative, locally-minded cuisine of the Chicago co-op Edible Alchemy.