• Full Tour Schedule at the link

As the accordionist and clarinetist jammed together to The Godfather theme in the halls of the conservatory, they knew exactly what they had to do: Start a klezmer band.

But what happened was a completely different story. Joined by a whole family of other instruments, Sagapool went from Balkan and Gypsy-inflected impromptu shows on the summer streets of Old Montreal to crafting acoustic original instrumentals as a six-piece band—one so in synch that it’s no 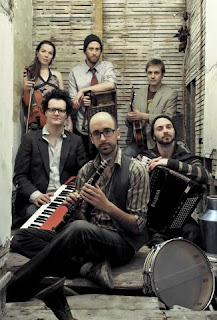 surprise when the guitarist jumps up to join the bassist for a thumping four-handed riff. It’s a gang of good friends and relatives sharing long, winding stories (the sagas in Sagapool)—but with stunning chops.

“Early on, we were bringing heat to the cold winter, but now we’re assuming our northerness,” exclaims clarinetist and co-founder Guillaume Bourque. “I think the result is really well balanced. We’re known for our energetic pieces, when people switch instruments—we all can play all the instruments involved. And we keep that energy, even if our music feels more introspective.”

This mix of good-natured shenanigans, striking musical skill, and Northern thoughtfulness has won Sagapool a Canadian Folk Music Award (Best Instrumental Album, 2008) and gained them showcases at major music events like WOMEX (2010). Their dynamic, freewheeling show will reach the U.S. and Canada, as the group tours in March and April 2012. The band’s journey will take them from North Carolina to Northern New England, with a stop in New York (Living Room, March 29), and to the Maritimes.

“We want people to get up and dance, but we also want them to think,” Bourque explains. To do this, Sagapool draws on its many family ties. “The name ‘Sagapool’ doesn’t really mean anything. It doesn’t refer to a style. But in French, it sounds like a family story, an old story passed down,” smiles Bourque.

The story is rich with characters and intriguing settings. With members from Hungary (percussionist 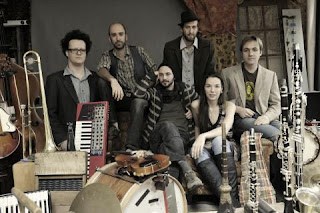 Marton Madersparch) and Italy (second-generation accordion whiz and co-founder Luzio Altobelli), with links to Quebec’s remote, stunning Magdalen Islands (“Le vent des Îles”) and to the culturally vibrant northern reaches of the St. Lawrence River, the band knows exactly how to capture the spare outlines and rich textures of hyperborean places and people. The pieces evolved into little stories of their own, telling tales from the cosmopolitan hub of Montreal and from the outer edges of northeastern Canada, with its still expanses punctuated with leaping, bubbling energy.

The original fascination with the intersection of movie music and European roots, with the flash of Balkan exuberance and the stately skip of klezmer lines, may no longer be the sole animating force behind the band’s music—though it’s still a major element in its high-intensity, spirited live shows. But the cinematic, and it’s the suggestion of narrative, continues to inspire Sagapool.

“I think a lot of the power of our music comes from the melodies,” says bassist and pianist Alexis Dumais. Melodies that unfold with quiet intensity in solo piano pieces and charming ensemble moments that use the contrasting colors of strings and reeds to emotional effect (“45.56°N 73.58°O -90°N”). “We jammed more for this album,” Dumais continues. “We took the material and melodies different members of the band brought in and just played. As we did that, the songs came to life.”