Musical Theatre: I Love You Because March 28 - April 15 in Toronto

Toronto, Ontario... Angelwalk Theatre, the producers of the Dora-nominated Toronto premiere of Altar Boyz and [title of show], announced this morning the cast for I Love You Because. With music by Joshua Salzman and Book and Lyrics by Ryan Cunningham, this hilarious new musical will have Toronto audiences

smiling in their seats. I Love You Because opens on March 30, 2012 at the Toronto Centre for the Arts and runs until April 15.

• Tickets are on sale now and can be purchased online at www.angelwalk.ca, through the Toronto Centre for the Arts box office at 416-872-1111.

I Love You Because is a modern musical twist on Jane Austen's Pride and Prejudice. Set in New York City, a young, uptight greeting card writer's life is changed when he meets a flighty photographer. Along with their eccentric friends and siblings, they learn to love each other not in spite of their faults, but because of them. Declared "infectiously entertaining!" by The New York Times and "the perfect date musical" by Talkin' Broadway, I Love You Because is "everything an Off-Broadway musical should be... a charming piece of work that will send you home smiling" (The Wall Street Journal).

Dora Award winner Jeff Madden, making his first return to The Toronto Centre for the Arts since closing the record breaking production of Dancap's Jersery Boys, will be playing the role of Austin. Prior to that, he appeared in over 16 productions over eight seasons with the Shaw Festival, including Tristan, Belle Moral, Happy End, Man And Superman and Floyd Collins. He has also appeared at the National Arts Centre, the National Ballet of Canada, Tarragon Theatre, Manitoba Theatre Centre, Talk Is Free Theatre and The 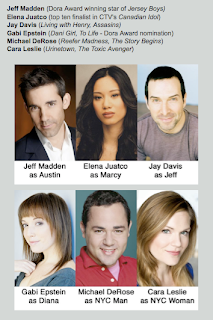 Charlottetown Festival among others.

Playing the role of Marcy is Elena Juatco who made her start as a top ten finalist in CTV's Canadian Idol. Most recently she has appeared at the Vancouver Fringe Festival in Dianne & Me (My Lucky Penny), a B.C. tour of The Buddy Holly Story (Arts Club), and Dirty Rotten Scoundrels (Vancouver Playhouse) for which she won a Jessie Award for Best Actress and an Ovation Nomination. Elena also appeared in Snow White & The Group of Seven (Ross Petty Productions), which garnered her a Dora Award nomination.

Jay Davis, most recently seen in the NextStage Festival's Living With Henry, will be playing Jeff. He has previously been seen in Birdland Theatre/Talk Is Free Theatre's 2010 production of Assassins at The Theatre Centre, the 2009 "Best of Fringe" production of Just East of Broadway, Tick Tick Boom, The War Show, Miss Saigon, Jesus Christ Superstar, Dracula, Little Woman, Little Shop of Horrors, Joseph and the Amazing Technicolor Dreamcoat, The Full Monty, and Evita.

The role of Diana will be played by Gabi Epstein, a Dora Award nominated actress and one of Toronto's leading cabaret performers. Favourite credits include To Life (Herald Green Jewish Theatre), Dani Girl (Talk Is Free Theatre), Blood Brothers and Cowgirls (Drayton Entertainment), Edges (Acting Up Stage), The Panto of the Opera (Moonpath Productions), and various Disney characters aboard Disney Cruise Lines. Gabi released her debut CD "Show Off" in 2010 to critical acclaim.

As previously announced, I Love You Because will be Directed by Darcy Evans and Musical Directed by Lily Ling.