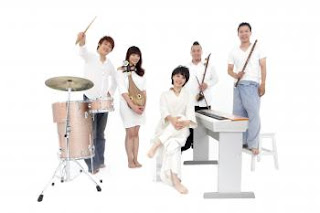 kung-fu-like skills are beautifully blended. Thus, a new kind of Chinese music is born with a soul of Jazz.

Led by Toshiko Akiyoshi Composition Award winner Yuwen Peng, Sizhukong was founded in 2005 by a group of innovative jazz and Chinese music virtuosi who come from different backgrounds but share the same passion and belief in music.  The group has released two albums: the eponymously titled Sizhukong (2007), which was nominated for two Golden Melody Awards (the most important music awards in Taiwan), and Paper Eagle (2009), which won two Golden Melody Awards (Best Instrumental Album and Best Instrumental Album Producer.) Both albums caught the attention of music lovers and critics alike. Sizhukong have been invited to play at numerous international festivals spanning throughout Asia, Europe and Central America. The spirit of jazz is very much to the fore in their arrangements and improvisations and sits in perfect harmony alongside centuries of Chinese tradition.