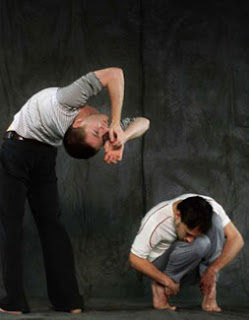 In the fall of 2009, Sylvain Émard embarked on a new creative cycle. This project comprises two separate phases, volumes I & II. Each volume, composed of short pieces, make for a full evening program.

Fragments – Volume I: patchwork of insistent urgency. In three solos and a duet, Sylvain Émard has crafted for his dancers roles that are adapted to their most pressing needs, establishing four contrasting worlds where the depth and authenticity of gesture convey the complexity of human nature and reveal the vulnerability of the individual. Intense and often surprising, the actress Monique Miller slips majestically into this new work. Her minimalist movement is touchingly eloquent, offering a troubling counterpoint to the raw energy of the three exceptional dancers: Manuel Roque, Laurence Ramsay and Catherine Viau. The piece, like a collage of miniatures, is the first part of a diptych that places the dancer at the very heart of creation.

Fragments – Volume I is performed to music by Québécois composer Michel F. Côté and German composer Jan Jelinek, and supported with evocative lighting design by André Rioux and costumes by Denis Lavoie. This team of renowned collaborators also includes the artistic consultant and dance coach Ginelle Chagnon. This creation was made possible thanks to artistic residencies at Circuit-Est centre chorégraphique. Fragments – Volume I premiered with great success at the Canada Dance Festival in

Ottawa in June, 2010. It is now touring France and Canada. This first chapter is co-produced by Sylvain Émard Danse and the Canada Dance Festival in collaboration with the Goethe-Institut.