Toronto Premiere: My Granny the Goldfish to April 15 at Factory Theatre

WHAT’S SO FUNNY ABOUT CANADA, RACISM, ALCOHOLISM AND HYPOCHONDRIA? LOTS, ACCORDING TO PLAYWRIGHT/NOVELIST ANOSH IRANI
My Granny the Goldfish
March 17 to April 15, 2012 at Factory Theatre, Toronto

TORONTO, ON…  “We are pleased to present the Toronto premiere of My Granny the Goldfish, the hilarious and warm-hearted comedy by award-winning Vancouver playwright/novelist Anosh Irani, to

Toronto audiences March 17 - April 15, 2012,” says Factory Theatre Artistic Director Ken Gass, “Canadians love to laugh at ourselves and this irreverent play set in Vancouver and Bombay about three dysfunctional generations of a family, is a great opportunity to laugh out loud, while also joyfully dealing with issues of life and death, racism and intolerance as well as, ultimately, forgiveness and acceptance.”

In My Granny the Goldfish, Granny travels from Bombay to visit her beloved 25 year-old grandson Nico who is in hospital in Vancouver.  Her “cure alls” are attitudes, platitudes and a full flask of whiskey. Despite Nico’s neurotic and hysterical protests, Granny helps him truly heal – ultimately proving that laughter is the best medicine.

The opening night is Thursday, March 22, 8 p.m., with the playwright in attendance. On Friday, March 23, 7 p.m. (before the 8 p.m. show), Anosh Irani (pictured below) will also be at Factory Theatre to participate in a special discussion regarding the similarities and differences of writing plays versus novels. Anosh Irani was born and brought up in Bombay, India and moved to Vancouver in 1998. He is the author of the acclaimed novels The Cripple and His Talismans and The Song of Kahunsha, which was a finalist for CBC Radio's Canada Reads and the Ethel Wilson Fiction Prize, was published in thirteen countries, and was a bestseller in Canada, China and Italy. His play Bombay Black was a Dora Award winner for Outstanding New Play. Irani was nominated for the 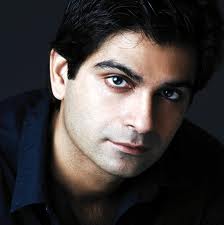 Governor General’s Award for Drama for his anthology The Bombay Plays: The Matka King & Bombay Black. His latest novel, Dahanu Road, was longlisted for the 2010 Man Asian Literary Prize.  Irani first presented My Granny the Goldfish in Factory Theatre’s Cross Currents Festival in 2009, and has reworked the script for the Factory Theatre production.