TORONTO, ON - Cahoots Theatre Company, founded on February 11, 1986, celebrates its 25th Anniversary Season with the world premiere of SIA, by recent National Theatre School of Canada graduate Matthew MacKenzie, playing March 24 to April 15, 2012 in the Factory Studio Theatre. The 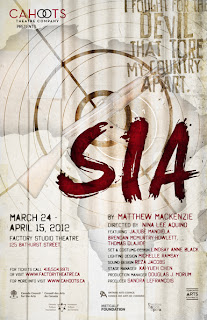 "SIA is a Canadian story about our First World views of Africa - the beauty and kindness of our sensibility but also the cruelty and ugliness of our illusions," says Aquino, "Matthew's stark, honest take - that we want to save the world, but don't really know how - is that we are hostages of our own entitlement." The day Canadian volunteer Nick Summers is scheduled to fly home from Ghana, he wakes up hung over and tied to a chair. His new friend, Abraham, a former child soldier from Liberia, has taken him hostage in a desperate bid to stop a war crimes trial at the International Criminal Court. If Abraham does not succeed, Nick will not survive. This is the story of how personal choices can have global consequences.

This fast-paced show runs 90 minutes, with no intermission. 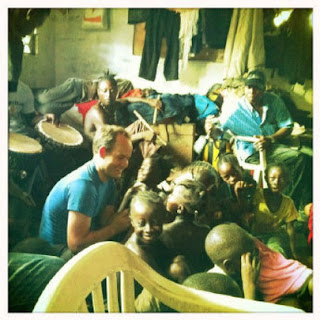 Cahoots Theatre Company is dedicated to the creation, development and production of new works that investigate the complexities of Canadaâ€™s cultural diversity, and examine the intersections of these cultures. Diversity is more than race, nation of origin and ethnicity. It also encompasses gender, sexuality, ability, language and class.

SIA playwright Matthew MacKenzie and producer Sandra Lefrancois travelled to Liberia in November-December 2011 with the generous support of the Toronto Alliance for the Performing Arts' TRIP, the Canada Council for the Arts' Theatre International Program and the National Theatre School's Cultural and Artistic Leadership Program (CALP). To find out more about this initiative, read Matt's blog posts. A very successful workshop of SIA was held with Liberian artists in partnership with the Liberian Dance Troupe. This partnership laid the groundwork for taking Cahoots' production of SIA to Liberia.