The Vindication of Senyora Clito Mestres March 21-31 in Toronto

Toronto - April Productions is proud to present a re-visioning of its production of The Vindication of Senyora Clito Mestres, starring Artistic Director Dragana Varagic who was nominated for an Outstanding Performance Dora Award for her solo in this acclaimed work just over a decade ago. The 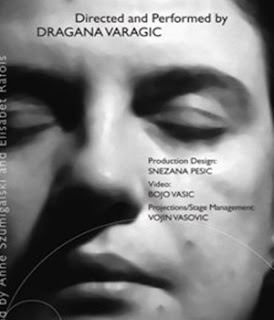 Vindication of Senyora Clito Mestres, in an all-new production directed by Varagic, runs March 21-25 at Theatre Passe Muraille's Backspace with an additional performance March 31 at the Isabel Bader Theatre.

Presented on the heels of International Women's Day, The Vindication of Senyora Clito Mestres is a timeless legacy from one woman to all women. It speaks in fragile tones about a woman who finds herself unexpectedly at a crossroads. It is a story of a woman who loses her husband, her child, her homeland and her identity, but finds salvation in her return to theatre. Roig uses the metaphor of the Greek queen Clitemnestra to tell the story of an actress who, by preparing herself for the role, finds her own voice and inspiration to overcome the tragedies of her life. With its humorous approach and tragic overtones, the play easily finds its way into the heart of the audience.

In this new staging, Varagic was inspired by her work with world-renowned European theatre artist Jozef Nadj, studying integration of text-based and image-based theatre. In this reworked version, she takes the script and creates two selves of the same woman - one persona on stage and the second persona on video, crossing the boundaries between fiction and reality.

Varagic directs a stellar creative team including production designer Snezana Pesic, winner of a 2011 Betty Mitchell Award for Outstanding Lighting Design, and Toronto media artist Bojo Vasic, winner of a Gold Award at Dallas HeSCA Media Festival for his video work.
April Productions was founded by Artistic Director Dragana Varagic with the aim of producing plays that reflect the contemporary Canadian cultural fabric and that search for the connections between modern and classical, Canadian and international theatre.

Opens March 21 and runs to March 25, 2012 at Theatre Passe Muraille's Backspace, with an additional performance March 31 at the Isabel Bader Theatre