NEW YORK CITY - B Arts Presenter cordially invites you to hear acclaimed soprano Willsonia Boyer. She will perform a concert of music by women composers whose work spans six centuries. 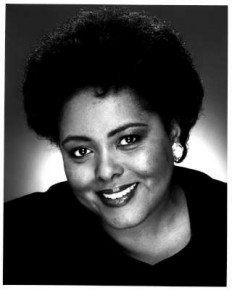 WILLSONIA BOYER, soprano, performs both as an opera singer and as a concert artist.

Operatic roles include the title role of Aida, Serena in Gershwin’s Porgy and Bess, Helen in Schubert’s The Conspirators, the Countess and Sandrina in Mozart’s The Marriage of Figaro and La Finta Giardiniera, respectively.  In addition, Ms. Boyer has appeared with the New Jersey Concert Opera in the title role of Tosca and as Helmwige in Die Walküre  in 2006,  in New York City Opera’s premier of Margaret Garner  in 2007 and in Sherry Boone’s and Sean Jeremy Palmer’s Ellen Craft in 2009. 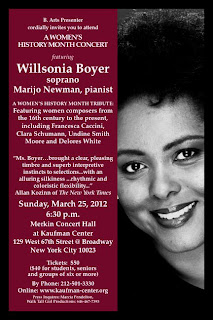 Concert engagements include the inaugural concert of the Harrison Opera House in Norfolk, Virginia, a series of all-Mozart recitals given under the auspices of the Friends of Mozart Society, opera excerpts with the Petersburg (VA) Symphony Orchestra and guest appearances with the Ars Musica Chorale of New Jersey and with the Hodie Ensemble of New York.