Toronto - The 10th Small World Asian Music Series features a fantastic line up of local and emerging, as well as internationally acclaimed music artists including:  Kayhan Kalhor (April 21), Asian Sound Slam (April 29), 3 Generations of Mewati Gharana (May 5), Autorickshaw (May 9), Next Music From Tokyo (May 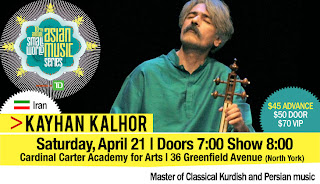 Kalhor (April 21)
Kayhan Kalhor is undoubtedly one of the most exciting artists to emerge from Iran today. With his truly virtuosic command of the kemencheh (a bowed, spike fiddle), an emotional immediacy as a composer, and a mesmerizing stage presence, it is no surprise that he has become a regular presence on the world's most celebrated stages. Born to a Kurdish family in Tehran in 1963, he was a child prodigy who was invited to work with the National Orchestra of Radio and Television of Iran when he was just thirteen years old. He crisscrossed Iran learning the country's rich folk music traditions, including in the northern region of Khorasan and amongst the Kurdish community. He also studied Western classical music in Rome and in Ottawa, and received a degree from Carleton University. In 1991, he formed the renowned Persian classical ensemble Dastan.

Asian Sound Slam (April 29)
As part of Small World's 10th Annual Asian Music Series, the Asian Sound Slam is our first ever showcase for emerging musicians from the GTA's Asian communities. Young unsigned artists crossing boundaries, using their energy to create new and exciting sounds will fill the night with their vibrant beats and melodies. From South Asian Hip Hop to Japanese Rock, Toronto's young Asian diaspora is a talented generation motivated by a spirit of ingenuity and creativity and the Sound Slam is their chance to send that message loud and clear! Featuring: Violets & Viruses, The Gunsmith & MoHit, Sing Bandana Singh 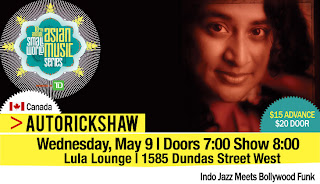 Next Music From Tokyo (May 18,19)
Japanese culture is ubiquitous in major cities across Canada with its popularity apparent in areas such as food/cuisine, fashion, video games and technology. But Japanese music gets little to no recognition at all. Which is unfortunate since Tokyo secretly harbors what is arguably the most exciting music scene in the world. Compared to their North American counterparts Japanese musicians tend to be more adventurous when it comes to song-writing and especially live performances. Females also play a much more prominent role on-stage, in the audience and as sound technicians. Tokyo’s independent and underground music scene has an ebullient energy and freshness that is highly addictive and without peer.

Liu Fang (May 19)
Chinese Classical music often has thematic, poetic or philosophical classifications and is typically played solo, such as on the guqin, a 7-string zither, with over 3000 years of history, or the pipa, a lute with over 2000 years of history. The instruments demand not only a mastery of technique but a high degree of sensitivity to evoke the subtle sonorities and deep emotional expressions that rely on the left hand techniques (through, for instance, sliding, bending, pushing or crossing of the strings to produce typical singing effects and an extreme dynamical ranges), and where synchronized ensemble playing is virtually impossible. Celebrated as being "the empress of pipa” (L'Actualité, 2001) and “divine mediator" (the French World magazine, 2006), Liu Fang transmits in an expressive and graceful way the beauty of the ancient music, while drawing out the subtle sonorities of the pipa and the guzheng.