NEW YORK CITY - Born in 1983, Seun Kuti first began performing with Egypt 80, the extraordinary combo first fronted by his father Fela, at age nine, warming up audiences with renditions of his father's 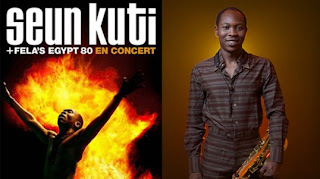 songs. After Fela's death in 1997, Seun stepped up to the front of the band, leading the celebrated combo as both lead vocalist and saxophonist. While his father's influence cannot be understated, Kuti was determined to cut his own distinctive musical path, incorporating contemporary influences into the traditional afrobeat approach. "What inspires me is the time that I live in," Kuti says. "Basically what is happening today in Africa are the same things that were happening 40 years ago, when my father was songwriting, but they're happening in different ways. So when I write my music, it's from the perspective of a 29-year-old man living in 2012, instead of a 30-year-old man living in the 1970s."

Kuti's latest album is From Africa with Fury: Rise, released in 2011. The album follows Kuti's critically praised debut, 2008's Many Things, which was unanimously hailed for continuing Fela's musical legacy. From Africa with Fury: Rise sees Kuti finding his own idiosyncratic voice as songwriter, singer, and band leader, its songs and sonic approach marked by provocative edge and mature self-assurance. Where Fela's 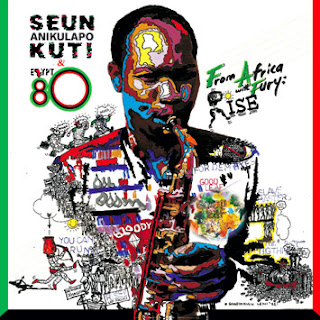 work often featured an explicit call to revolution, Seun's goal is more subtle. He sees his role as that of an educator, speaking truth to power in order to provoke awareness and debate throughout his beloved homeland. "In Africa today, most people are struggling in silence," he says. "The systematic oppression of the people has made them blinded to their reality. Everybody's just thinking about survival. Nobody wants to stand up for anything, everybody just wants to tow the line. So I'm trying to make people think about these things that they are forgetting. I want to inspire people to want things to change."

Kuti is determined to speak to the new generation of young Africans born after his father's glory days. If he learned but one lesson from Fela, it is that that no one has greater impact on hearts and mind than the true artist. As such, the powerhouse protest music found on From Africa with Fury: Rise serves as a kind of musical antidote to the corporate pop that he feels is polluting Africa's airwaves, distracting its citizens from the things that truly matter. "Music has great impact on people's feelings," he says. "That's what music should be. Pop music today is all about me, me, me. Nobody is singing about we. But nothing can change if we don't look out for our brothers and sisters."