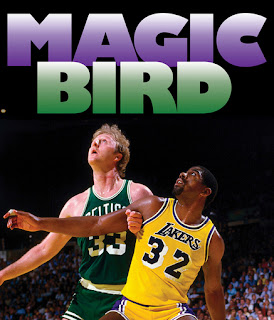 • NBA legend Earvin "Magic" Johnson will host a talk back on stage with the MAGIC/BIRD cast after the 2pm performance on Friday, April 13th!

NEW YORK CITY - Fran Kirmser and Tony Ponturo, the producers of the new Broadway play MAGIC/BIRD, announced today that Hall of Famer Earvin “Magic” Johnson will hold a talkback for ticketholders following the 2pm matinee performance at the intimate Longacre Theater (220 West 48th Street) on Friday April, 13th. Johnson, one of the two key subjects (along with fellow Hall of Famer Larry Bird) of the six person original play, will speak with the audience and give his thoughts in what will be a rare and memorable Broadway event. MAGIC/BIRD, currently in previews, will officially open with a 7 p.m. performance on Wednesday April 11th.

The Friday April 13th matinee has been added to the schedule in order to accommodate the demand the show has seen from families, many of whom will be off for the spring break that week.

“We are very excited to be able to have Magic join us for this talkback following the matinee performance on Friday April 13th,” the producers said. “We have seen already in previews that this story is one for all ages, and we think hosting a special matinee that Friday, when many young people are off from school, will give parents a chance to bring their kids to experience the play and then hear Earvin himself talk, in once in a lifetime opportunity.”

Tickets for the matinee performance on April 13th at 2pm are open for sale to the general public at Telecharge.com.  For groups of ten or more call 212-554-3430.

The talkback with Magic Johnson is the first in what will be a series of special nights throughout the run of the show. Additionally, in the next few weeks, a host of retired NBA stars will be on hand for “Legends of Basketball Night” on April 19th, and the United States Olympic Committee will host a special “Olympic Athlete Night” on April 17th.  Other special events will be announced in the coming weeks. 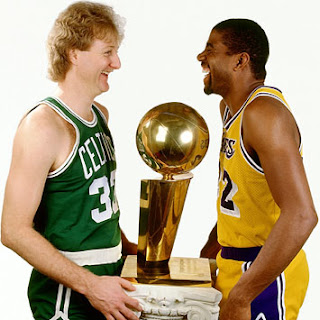 At the heart of one of the fiercest rivalries in sports history, two of the greatest basketball players of all-time battled for three championships, bragging rights, and the future of their sport in the 1980’s. Johnson and Bird electrified the nation on the court, reinvigorated the NBA, and turned their rivalry into one of the greatest and most famous friendships in professional sports.

This is the second original project undertaken by Kirmser and Ponturo. Together they share a common vision of bringing new, original plays to a wide, diverse audience of theatergoers, initially combining the drama of sports and entertainment through Kirmser Ponturo Group. Lombardi and now MAGIC/BIRD are the first two products of that vision.

The Longacre Theatre was built in 1913 by H. H. Frazee, a Producer/Manager who was the owner of the Boston Red Sox's and the individual who sold Babe Ruth to the New York Yankees. He later sold the theater to The Shuberts in 1919.