Cavalia's All New Show Odysseo Premieres May 15 in Toronto

CAVALIA RIDES INTO TORONTO MAY 15th

WITH AN ALL-NEW CREATION:
ODYSSEO - Tickets on sale now through August 2012

TORONTO, April 30, 2012 - Due to an overwhelming reception by the Toronto community and strong ticket sales, Cavalia's new production, Odysseo, announced that seven additional performances will be added to the limited engagement of the production at Toronto's Port Lands (Lakeshore East & Cherry Street) which will extend its Toronto stay by one week. The 5-D mega-production will now run until June 3, 2012.

CAVALIA RIDES INTO TORONTO MAY 15th

WITH AN ALL-NEW CREATION:
ODYSSEO

TORONTO - Cavalia, whose horse-and-human production received standing ovations and critical acclaim in Toronto in 2003 and 2005, today announced the premiere of an all-new, larger-than-life production, 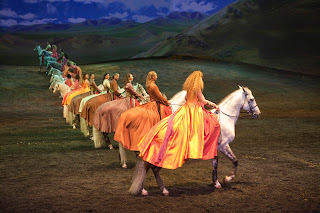 Odysseo, on May 15, 2012. The only Canadian stop on its triumphant North American tour, Odysseo will be performed under the world's largest, most spectacular Big Top tent at Toronto's Port Lands. Tickets are available starting this Saturday at www.cavalia.net or by calling 1-866-999-8111.

"The horse has played a greater role in human history and progress than any other animal. Horses have taken us to the ends of the earth, enabled us to build bridges between cultures and expand civilization. It is the beauty and harmony of this ancient relationship, this meeting of horse and man, that inspires Odysseo," said Normand Latourelle, Founder and Artistic Director of Cavalia.

As friends, partners and inseparable performers on stage, 70 horses and 50 artists lead the audience on a great journey to another world - a world of dreams where together, they discover some of the planet's most unforgettable landscapes. Cavalia has created a stage the size of two hockey rinks for the epic Odysseo, in the middle of which rise two hills, each three storeys tall and a lake where human and horse come to play. 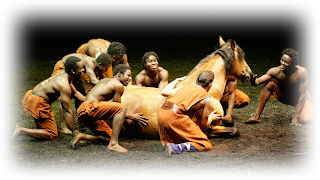 Above the stage hangs a technical grid capable of supporting 80 tons of lighting and projection equipment, far beyond anything attempted on any touring show.

"With this new creation, Cavalia marries the equestrian arts, stage arts and high-tech theatrical effects at never-before-seen levels. We've created a veritable revolution in live performance: the world's largest touring big top, the biggest stage, the most beautiful visual effects, and the greatest number of horses at play. Most importantly, it's a world of happiness," Latourelle continued.

The creators of this new ode to the horse made the decision to indulge their wildest artistic ambitions. And Cavalia's gamble has paid off: Odysseo pushes the limits of live entertainment by creating a two-hour dream -- a feast for the eyes that succeeds in delivering the spectacular with soul.

A huge hit wherever it's played, reviews have been unanimously glowing. 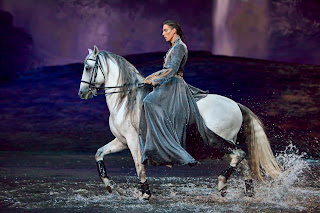 For its exclusive Toronto run, Odysseo will be presented under the White Big Top at the Port Lands.
• Tickets are on sale now and range in price from $29.50 to $119.50 plus applicable service charges.
• For guests who desire an extraordinary outing, the show can be customized for an extended, unique experience from $99.50 to $230 including a Horse Lovers Package that lets patrons tour the Cavalia stables after the show, and the VIP Rendez-Vous Package which includes a post-show stable tour plus a cocktail/dinner reception and much more.
• Special pricing is available for children (2-12), juniors (13-17), and senior citizens (65+).
• For ticket info, visit www.cavalia.net or call 1-866-999-8111.

SHOWTIMES
Opening night will be Tuesday, May 15, 2012. During Odysseo's Toronto run, there will be nightly shows except Sundays and Mondays, matinee and evening shows on Saturdays and matinee shows on Sundays. For more information, a detailed list of show dates and reservations, call 1-866-999-8111 or visit www.cavalia.net 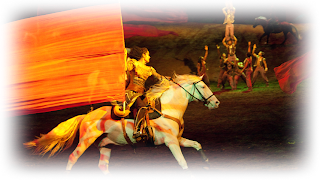 ABOUT CAVALIA
Headquartered in Montreal, Quebec, Cavalia is an entertainment company that specializes in the creation, production and touring of innovative shows for audiences of all ages. Founded by Normand Latourelle, one of the co-founders of Cirque du Soleil the company has expertise in the equestrian and performing arts, and is known for its innovative use of cutting-edge technology, multimedia and special effects allowing for the creation of magical, unique, never-before-seen theatrical experiences. The company's original production, Cavalia: A Magical Encounter between Human and Horse, has been touring since 2003 and has thrilled over three million spectators across North America and Europe.