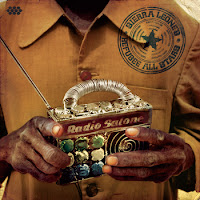 Our third studio album -- RADIO SALONE -- will be released April 24, 2012!  RADIO SALONE --on CD and limited-edition 2LP vinyl via Cumbancha--  reflects the influence radio has long had on the band. In the pre-TV and Internet days, radio served as the musical connection to the rest of Africa and the world. Long before the war, members of the band were exposed to vintage reggae, Congolese soukouss, American soul, and much more. During the war, radio served as an essential escape from the harsh reality of the refugee camps, bringing news and music.

Produced by roots reggae, soul and Afrobeat guru Victor Axelrod, aka Ticklah, (Sharon Jones and The Dap-Kings, Amy Winehouse, Easy Star All Stars, Antibalas) and recorded in Brooklyn’s Dunham Studios, Radio Salone marks the Sierra Leone's Refugee All Stars' most musically sophisticated collection of songs to date. The album is the follow-up to the band’s 2010 album Rise & Shine, which was the #1 album of the year on the World Music Charts Europe.

Produced by Victor "Ticklah" Axelrod at Dunham Studios in Brooklyn.