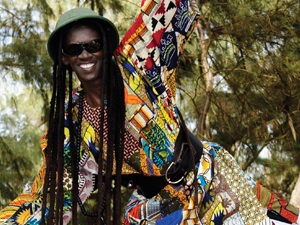 modern approach to music that begins with their respective African roots and then ventures far beyond.

There was a sizable crowd who came out midweek to hear the music of these two unique artists who both happen to hail from the African continent. Opening act Donné Roberts treated the audience to a set of his own brand of music that features the singing melodic guitar of his native Madagascar and then weaves in a multitude of other influences from the Egyptian vocals of singer Maryem Tollar to Russian and Japanese lyrics, classic guitar blues and an overall veneer of jazzy modern rock sensibility. He’s a hometown artist and scored a hit with the crowd that was growing in anticipation of the main act.

Cheikh Lô is often described as a maverick of African music, with a sound formed from a seamless fusion of West African melodies, Central African rhythms, Latin and Caribbean elements with a dash of funk and modern jazz thrown in for good measure. It’s an eclectic mix that saw the crowd come up close 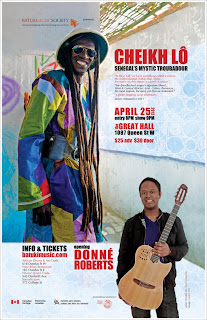 to the stage and dance along for his whole set. His music features heavy and insistent rhythms with jazzy saxophone lines and sweet guitar lines, and his slick band features a drummer and no less than two percussionists, along with Cheikh himself who alternates between percussion, guitar and vocals that easily make the leap from West African to Latin singing styles.

With his long dreadlocks and colourful patchwork clothes, he's often mistaken for a Rastafarian, but Cheikh is a devotee of Baye Fall, a mystical sub-branch of the Islamic Sufi order centred largely in Senegal in West Africa  Many of his lyrics reflect his beliefs. His stage presence was laid back and appreciative - with the audience warm and responsive in turn.

Cheikh Lô was born in Burkina Faso to Senegalese parents and he grew up in Burkina Faso near the border with Mali. He began playing music at an early age, heavily influenced by the Cuban and Congolese music that was popular at the time - and elements you'll still hear in his music. It’s his first appearance with his band in the city in 14 years (he did tour as part of the “Still Black, Still Proud” ensemble which saw him perform in Toronto at Koerner Hall in 2011).