TORONTO - Toronto-based DRUMHAND is a rhythmic experience not to be missed. Fortunately for fans from Toronto, Hamilton, Ottawa, a few cities in Quebec and Canada's east coast, the band will be 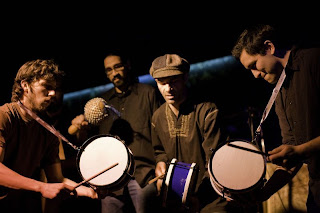 touring their alternately funky and ethereal world music and jazz works from April through to August.

DRUMHAND has a sound as big as its name and their reputation is following on the same path. Hot on the heels of their debut release MOVING STILL, the Toronto-based five-piece band is gaining increasing recognition for their innovative orchestrations and upbeat vibe. The critically-acclaimed recording, amalgamates Latin, African and jazz music to create an album that's sure to get anyone on to their feet," says Kat Dornian of !earshot (where the CD has been charting since January 2011). And that's just what this group does in their live performances. Like a New Orleans parade band in summer heat, DRUMHAND uses rhythmic frenzy and passionate, punchy horns to drive the music. Drawing inspiration from the circuitous rhythms of hot 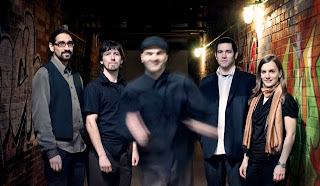 climates, DRUMHAND engages audiences of all ages who find themselves dancing, singing, chanting and drumming along.

Utilizing unusual percussive instrumentation from around the globe, such as the one-stringed berimbau of Brazil and the box-shaped gome foot drum of West Africa, the group also explores more melodic composition on the atenteban flute of Ghana with saxophones, brass and vocal work in several different languages. The result is an edgy, accessible and sometimes haunting musical experience that sometimes draws comparisons to the Dirty Dozen Brass Band, Charles Mingus, Weather Report and Fela Kuti.