French Farce: Marivaux's The Game of Love and Chance Apr 16 - May 12 in Toronto

Toronto – Canadian Stage, in co-production with Centaur Theatre, presents The Game of Love and Chance, a boisterous comedy by noted French dramatist Pierre de Marivaux. The play, in a new translation 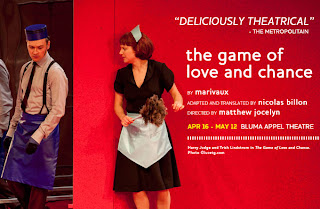 by award-winning playwright Nicolas Billon and directed by Canadian Stage Artistic & General Director, Matthew Jocelyn, is a hilarious girl-meets-boy romp about mistaken identity, true love and the business of marriage.

Following a month-long run at Centaur Theatre in Montreal, The Game of Love and Chance will be on stage in Toronto from April 16 to May 12, 2012 (Opening Night: April 19) at the Bluma Appel Theatre in the St. Lawrence Centre for the Arts (27 Front St. E). Tickets from $24 to $99 are available online at www.canadianstage.com, by phone at 416.368.3110 or in person at the box office.

“It is such a pleasure to share the seductively elegant, brilliantly comic world of playwright Marivaux with Canadian Stage audiences,” said director Matthew Jocelyn. “This play is timeless because it explores what we will do to attain love and deals with the versatility and instability of the human spirit and the human heart.”

The Game of Love and Chance follows Silvia (Trish Lindström) whose aristocratic father, Monsieur Orgon (William Webster), has arranged for her to marry a nobleman named Dorante (Harry Judge). Skeptical about love and marriage, and having never met Dorante, Silvia decides to trade places with her maid, Lisette (Gemma James-Smith), to get a sense of his true self. Her father agrees to play along but doesn’t tell her that Dorante has the same idea and plans to meet Silvia disguised as his servant, Arlequino (Gil Garratt). Monsieur Orgon tells his son Mario (Zach Fraser) of the plan and they both delight in the ensuing hilarity. An abstract, mirrored set designed by Anick La Bissonnière enhances the illusions created by each of the characters, and magnifies the farce and confusion surrounding love, identity and intentions.

Marivaux’s Le jeu de l’amour et du hasard (The Game of Love and Chance) was first performed close to 300 years ago in Paris. It was originally written for the troupe of Italian actors known as “les comédiens-italiens”, whose theatrical tradition was based largely on commedia dell’arte techniques of Italy in the 17th century. Jocelyn’s contemporary retelling of this builds on the gymnastic and exceptionally theatrical performance style of this group of actors, peppered with comedic moments highlighted through the witty banter and emotion of the text and Billon’s translation.

About The Game of Love and Chance
By Marivaux
Adapted and Translated by Nicolas Billon
Directed by Matthew Jocelyn
A Canadian Stage/Centaur Theatre co-production
April 16 – May 12, 2012
Opening night April 19

The Game of Love and Chance will be on stage at the Bluma Appel Theatre in the St. Lawrence Centre for the Arts (27 Front Street East). Performances run Monday through Saturday at 8 p.m. with matinees on Wednesday at 1:30 p.m. and Saturday at 2 p.m.

Tickets from $24 to $99 are available online, by phone at 416.368.3110 or in person at the box office.
Discount tickets are available through the Sun Life Financial Arts Accessibility Program.