• Submissions are now open and artists have until April 20, 2012 to enter.

The SoundClash Music Award is a Harbourfront Centre initiative designed to build upon our commitment to uncover, present and support emerging, creative and forward-thinking local talents. Toronto’s musical legacy 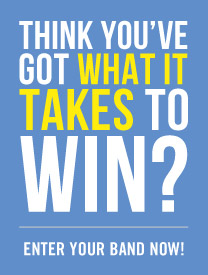 has spread far beyond our shores, with local artists dominating best-of lists around the world. The SoundClash Music Award recognizes, celebrates and highlights the next generation bubbling just under the surface.

Much of today’s most innovative music combines various global sounds with contemporary forms to create something new. With this in mind, artists and bands playing diverse, contemporary and cutting-edge music forms are encouraged to apply. Unlike many other awards, SoundClash Music Award winners are judged primarily on performance in an effort to seek out artists and bands that thrive in the live environment.

A panel of music critics, bloggers, artists and music industry leaders will create a short list from the submissions received. The short-listed artists will appear onstage at the SoundClash Festival, July 13-15. Winners will be determined by a combination of jury selections and public votes and receive cash prizes: the 1st-place artist receives $5,000, 2nd-place receives $3000 and 3rd place receives $2000 – plus additional prizes.

To enter the competition, artists must be residents of the Greater Toronto Area (which includes the municipalities of Durham, Halton, Peel and York). Eligible artists or bands must be completely independent, without attachment or affiliation to major record labels.

Artists must apply via Sonicbids with a minimum of three songs (live performance footage is encouraged). Participants must also be available to perform at Harbourfront Centre during the weekend of July 13-15, 2012.

Full submission details, as well as the results of the inaugural awards, which gave top prize to rock/soul songstress Saidah Baba Talibah, can be found at harbourfrontcentre.com/soundclash.