Toronto – In the second installment of year-round presentations as part of the TDJ Special Projects, The Thing Is marks its debut full-length release with an art exhibit and performance on April 22 at 918 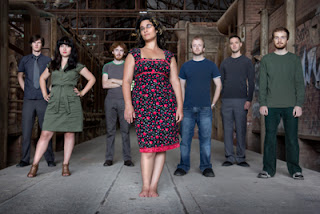 Bathurst Centre for the Arts.

The Thing Is, led by vocalist and composer, Tova Kardonne, is an eight-piece ensemble that fuses jazz, Balkan, funk and Afro-Cuban music. With off-kilter rhythms and heavy basslines, backed by a horn section, their debut release will showcase Kardonne’s 4-octave vocal range and feature guest appearances by Ted Quinlan and electric bassist, Rich Brown. This will be the group’s first full-length recording since they started performing regularly around Toronto in 2006

With roots in both the Sephardi and Ashkenazi musical traditions, Tova Kardonne has a track record of creating world-inspired jazz composition, reaching back to her days studying Jazz at Humber College . Kardonne regularly performs Bossa Nova, bebop, jazz/fusion and improvisation with various ensembles around Toronto . Her choral and Conservatory training in viola and piano fed into a passion for Jazz and classical, as well as South African, South Indian, Cuban, Brazilian, and Eastern European folk music.

Launched in 2010, TDJ Special Projects was designed to help support the local jazz scene and provide marketing and public relations support to interesting projects. This year’s series is generously supported by JAZZ.FM91. The final upcoming project will be Mike Downes’ premiere of In The Current (May 9).
cd release jazz jazz cd jazz in toronto live music in toronto