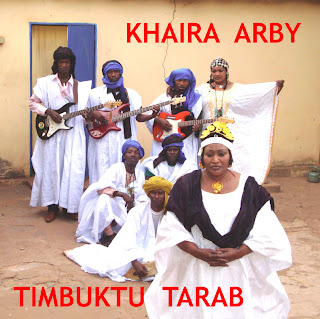 Returning to North America for a whirlwind April-May tour, Khaira Arby promises to mesmerize audiences with an intensity that flows from her home and from her unique spirit. Cities include Atlanta, Boston, Chicago, Los Angeles, Montreal, New York, San Diego, SF Bay Area, and Toronto, as well as the Festival International in Lafayette, LA and the Joshua Tree Festival in Joshua Tree, 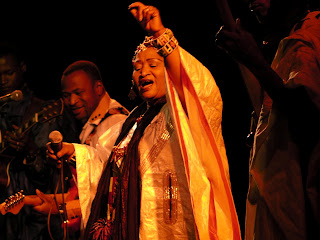 Born in a village not far from the famed city of Timbuktu, Arby is firmly planted in the desert sand. Her creativity flows in part from the people of her home region of Northern Mali—the young musicians in her band all hail from Timbuktu—and from their past and present struggles. As Arby puts it, “Trab is our land, our home, Timbuktu. Its history, its mystery, everything…”

Shrouded in regal colors, she presides over a small army of brilliant African musicians, who create a hypnotic backdrop for her gloriously swooping vocals. It feels a little silly to think of her as a frontwoman — the mere lead singer of some band — on the live stage, she's all showmanship and command.
–Stephen Thompson, NPR Music

Arby’s most recent album, Timbuktu Tarab (Clermont Music), shifts seamlessly between the edgy and progressive and the traditional and deeply rooted. Inspired by her cousin Ali Farka Toure, Arby turns to her mixed Berber and Sonrhai roots and draws on a sweet mixture of desert blues and recording sophistication, blending ripping electric guitar with the forefather of the banjo and funky drum breaks with the traditional percussion of the scraper and the calabash.

On “Timbuktu Tarab” (Clermont Music), her singing ricochets against eager backup choruses and lead-guitar lines that can hint at both Hendrix and Ali Farka Touré. Her band, mixing Western and African instruments, clearly knows its rock and reggae but keeps its African perspective, while a sinewy production flaunts every contrapuntal cascade. It’s world music that grabs and doesn’t let go.
– Jon Pareles, New York Times

History runs deep through Arby’s music. “Djaba” is a song about a legendary ancestral Tamashek warrior; it is also an authentic dance in Timbuktu. By reframing and reinterpreting the tale, Arby hopes to not only retell this important story, but also keep the dance alive among younger generations. “Sourgou” recounts the Tamasheks’ struggle against colonial domination, while “Youba” recounts struggles of a more contemporary sort, praising the brave return of salt mine workers by moonlight. 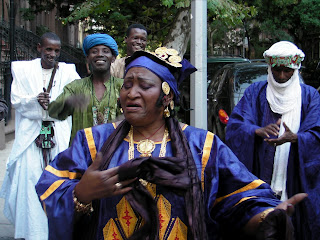 “Arby is one of Mali's most widely respected female singers and has a powerful style influenced by both southern Malian traditions and Arabic melisma.” – Joe Tangari, Pitchfork

Yet despite deep roots, Arby has long gone her own way, turning the bright compliments and veiled metaphors of traditional female praise and critique into hard-edged calls for change and justice. Her own life, discouraged by relatives who did not approve of her public performances, has honed this message. And like Miriam Makeba and other African divas before her, Arby embraces her power through words.

Arby’s composition process maximizes this and begins with the words themselves, drawing on a theme and developing lyrics from there. For her, the melody, rhythm and accompaniment all come later, highlighting the importance of music as social criticism to her fellow Malians. While she draws on the four languages of her heritage, the true impact of words bursts forth in her strong vocal delivery.

Arby addresses issues both painful and controversial, yet with a profound sense of heart and personal connection. In “Wayidou,” she pleads for the better treatment of women in Mali in general, “Happiness for women is gone. In these times we cannot speak of happiness and light. Why in a country of beautiful 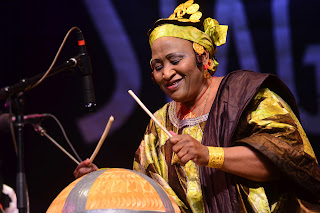 women do men go to war?”

In “Feryene,” she speaks out against female circumcision, which has hurt or killed many young Malian women, and continues to be a common practice. “Female excision has caused much suffering and much human loss. I am making people aware so that it ends and so that all Mali fights against it. As a mother I am making my contribution to that effort."

Khaira Arby, singing out and speaking out, has still become a darling of the Malian scene, as she captures the modern buzz of Timbuktu and the lilting pace of the desert sands, a world of movement and flow.

Yet her mind is always on the hope and struggle that guides her songs: “I dream of a recording studio and cultural center in Timbuktu for young talent, and I want to struggle against war, sickness, and poverty by recording albums in all the languages I can. I want to teach the daughters of the world, teach them to think, to value themselves, to sing."