Monty Python in HD: on Screen to April 5 in New York City

Monty Python Returns! In Rare Form!
Like You’ve Never Seen Or Heard It Before!
Re-Mastered to the Highest Definition Ever!
Includes the new 12-minute feature, “Terry Gilliam’s Lost Animations”

NEW YORK CITY - Yes! One of every filmgoer-with-a-funny-bone’s favorite cult-classic comedies is back in its best version yet — clearer, sharper and packing more laughs than ever before. 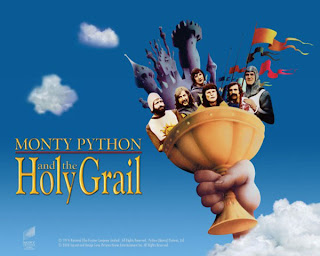 If you’re already a fan of this zany Monty Python send-up of the King Arthur Legend (and name one person who’s seen it who isn’t), you won’t want to miss the chance to experience the film the way it’s meant to be experienced — on the Big Screen, in a movie theater, with other die-hard fans laughing at the gags (the clippety-clopping coconuts!) and reciting the dialog (“It’s just a flesh wound!”) right alongside.

If you’ve never seen this comic masterpiece, you’re in for a very special treat. As reviewer Jeff Shannon writes, “It's basically a series of sketches woven together as King Arthur’s quest for the Holy Grail, with Graham Chapman as the King, Terry Gilliam as his simpleton sidekick Patsy, and the rest of the Python gang filling out a variety of outrageous roles. The comedy highlights are too numerous to mention....  The sum of this madness is a movie that’s beloved by anyone with a pulse and an irreverent sense of humor. If this movie doesn't make you laugh, you’re almost certainly dead.” 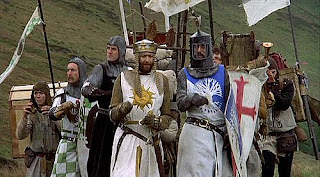