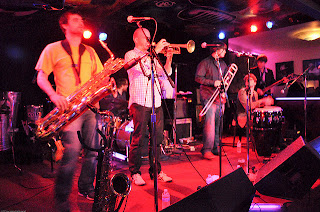 how The Rex deals with some Afro Funk-Soul-Disco...come hang!

Ikebe's first full length LP and new single were released on Ubiquity Records over the summer of 2011. Recorded at Killion Sound in LA (Orgone) and at Dunham Studios in Brooklyn (run by Tom Brenneck - of the Dap Kings, Budos Band, etc) this was a follow up on debut EP and several 45s released on Colemine Records. A track from the new album is featured in an ad for the new Mini-Coupe, currently airing on TV worldwide. The new record has been getting some great sales/press, including larger publications such as a review on Okayplayer's Revivalist, as well as independent blogs while gaining increased radio play, both in the US and international. While featuring members that tour regularly with bigger acts including Charles Bradley and his Extraordinaires, FELA! the musical, Lee Fields and the Expressions, The Duke Ellington Orchestra and Streetlight Manifesto, Ikebe Shakedown continues to play high energy shows throughout NYC and the Northeast.

• More dates on the way!