Buzkashi! - Last Screening May 6 as part of Hot Docs 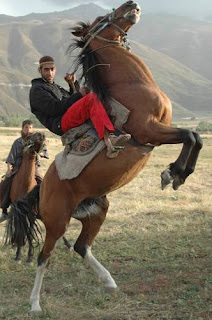 (Toronto)  Make way for one of the most hard-fought and toughest sports ever devised – the Central Asian equestrian free-for-all, called Buzkashi, featuring 200 tank-helmeted players on horseback fighting over a headless goat. Buzkashi is a precursor to polo.

In Buzkashi!, filmmaker Najeeb Mirza introduces audiences to an all-consuming sport that is a passiona&te pursuit across Central Asia, Afghanistan, southern Russia and western China. Moreover, he manages to make Buzkashi analogous to any Western sport with a fanatical following, telling “a warm human story, with people having values not that dissimilar to our own.” 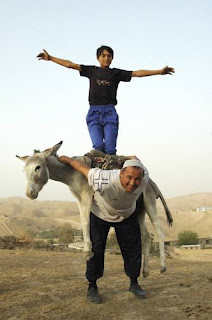 Buzkashi! written, produced, and directed by Mirza, who also handles camera, will have its World Premiere at HOT DOCS April 29, 2012 at 9:45pm at The Royal. This is a multi-layered film that follows three Tajikistani Buzkashi players on and off the field over a period of one year as they balance work, family and athletics - climaxing with the annual Nauruz tournament of Spring 2011.

“My intent with Buzkashi! is to expose people in the West to a world that may seem exotic and far away, but is actually very familiar and universal when you look beneath the superficiality of culture,” says director Najeeb Mirza, who knows and loves Central Asia, having lived and worked there for several years. “Through an intimate view on and off the Buzkashi field, we may find that perhaps those seemingly different people so far away are just us, but in different circumstances.”

The story begins in ancient times, when Central Asian shepherds faced attacks from wolves. The bravest horsemen would chase and grab the wolves, a skill that evolved into a 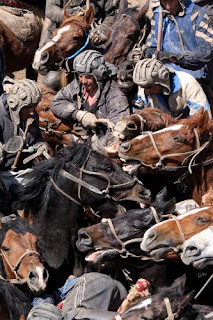 competitive pursuit. And so the game of Buzkashi was born; however, in place of the wolf they play with a headless goat. Playing in masses of up to 200 horsemen, players demonstrated their strength, courage and honor by maneuvering through the scrum to carry the carcass across the goal line.

Heralded as one of the country’s best Buzkashi players, Azam lives in a dusty village in southern Tajikistan. He follows the tradition of his forefathers, playing as an individual, eschewing help from other players to win sheep, cars, carpets and cash. His winnings have helped him maintain a good life for his household of 30 people - his two wives, 10 children, parents, and families of two absent brothers.

But times are changing. And a sport that has championed individual effort for centuries is gradually changing into a team sport. Azam’s success on the Buzkashi field is increasingly thwarted by competitors playing under team alliances, or “mafias”, putting winning above honor. For their part, Azam’s competitors believe they are saving the sport by making it more "Western."