It’s no joke: A Venezuelan, Mexican, two Americans, and two French guys walk into a bar. A bar that had been transformed into a control booth, while the backroom turned into a recording studio, with coils of effects pedal lines, quirky vintage electronics and homegrown synthesizers, a nylon-stringed cuatro, congas and a battery of timbales. Chicha Libre had taken over the storied Brooklyn music hub, Barbès (turning ten this year), where the regulars hail from all over the map and have gobbled up everything from Pet Sounds to Os Mutantes, from Willie Colon to Serge Gainsbourg.

From gritty backwaters and backrooms, from retro equipment and deceptive nostalgia, the multinational outfit (featuring members of Si Sé and Combustible Edison) returns with Canibalismo (Barbès 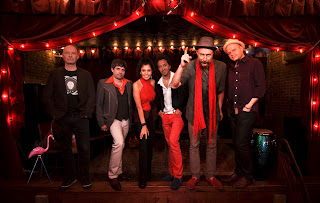 Records/Crammed Discs; U.S. release: May 8, 2012), an expression of the edgy craving that is fueling a pop rethink around South America and causing a stir in the rock-tired indie scene.

The album of originals, while tackling obscure mathematics and psychedelic inventors, took its cues from Peruvian chicha, a style that put surf guitar, rainforest psychedelics, and Andean flavor to a cumbia beat with open-minded exuberance. Chicha Libre has learned from and teamed up with the unsung mad geniuses of the music—such as Ranil and Los Shapis, who were featured on Roots of Chicha — then taken it as a springboard to join the international stream of tropical experimenters from Colombia to Argentina.

Like the legends of 60s and 70s rock sucked up and radically transformed the blues and jazz, today’s tropicalists are reshaping cumbia’s sound to suit their own unabashed, unconventional tastes. For Chicha Libre, this means vintage rock sounds rumble past irrepressible bursts of percussion, the Valkyries cavort to mellotrons, pan-Latin beats merge with curious lyrics, and the occasional passerby joins in with Guinean 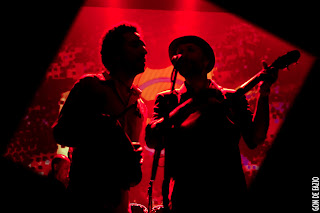 “Young Latin bands today, like chicha’s stars and like early rock innovators, cannibalize everything around them. They aren’t slaves to codes—the codes haven’t been created yet,” reflects Chicha Libre instigator and cuatro player Olivier Conan. “We’re part of a worldwide movement of people who have that kind of freedom. We don’t just play chicha . We can do whatever we want and absorb anything we like. We’re cannibals.”

“We are not making music from a distant place,” Conan insists. “We’re playing our own music, as much as the Beatles were playing their own music. We’re just using a different framework”