There's a story behind the tracks of Sembeh Ma Fa Fe: Revisits Volume. Stronghold Sound, the innovative San Francisco based global beats label/collective, traveled directly to Conakry, Guinea to record. It's a big 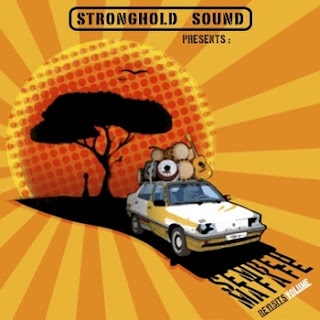 deal because it's quite difficult to get music from that nation from the usual channels, but with the West African nation undergoing its first democratic elections since independence in 1958 last year, the time is ripe for its rich musical heritage - past and present - to be shared with the rest of the world.

Dub Snakkr, one of the key djs/producers behind the Stronghold and a long time student of djembe culture, arrived in Conakry with a portable recording rig and a 7” record player. Setting up in his close friend’s hometown of Matoto, word soon spread that a ‘big-time US producer’ was in town and talent lined up to be involved… literally. Though Dub Snakkr was uncomfortable with his new reputation, he immediately began to record and work with local artists on their sound. Blending traditional West-African, reggae, dancehall, hip-hop as well as his own dub sensibilities, Snakkr (a.k.a. Ahmed Khouja) worked with nearly 20 artists to produce the eclectic and revealing body of Guinean music spanning from the roots of the Mandeng to revisits from the African diaspora. In addition, Raed Khazen and Jana Saleh from B-root Productions (Lebanon) assisted with final production and mixing.

Alpha Oumar ‘Bongo’ Sidibe, a native of the Conakry suburb where the album was recorded and close friend of Dub Snakkr, grew up next door to one of the most renowned djembe masters in the world, Mammady Keita, and has been steeped in the djembe musical tradition since youth. Bongo left to the US to be with his wife, Joti Singh, and teach the djembe art form, but they both returned in 2011 for the first time

since emigrating. Amidst fears of election backlash and instability, the couple traveled with their students, to bring artists and musicians together to record a compilation that expresses the current and the past of Guinea.

Bongo and his band Wontanara Revolution are based in San Francisco, CA and their track, “Root Boy” is the only one in the compilation that wasn’t recorded in Guinea. The tracks blends reggae, West African Mandeng influences and jazzy sax, and is not the only song to add political commentary to the mix.

Sembeh Ma Fa Fe, translated from Susu as, ‘strong sound coming,’ is a two volumes compilation that will be released separately.

This first disc, Revisits Volume, comprises several young and upcoming artists’ who’ve paid their dues in the Guinea music and performance scene, having typically come up from eclectic and frequent local block-

parties and talent competitions (often featuring breakdance groups, lip-syncs, emcees, acrobatics and more). The results of the recording expedition are sophisticated and feature a blend of influences from the traditional to modern, a pastiche of styles popular in the West African nation today. Guinea was central to the Mandeng Empire and is still home to many masters of the traditional music and culture, along with a new generation who have added the influences of other contemporary musical genres to come up with a new global sound.

Traditional polyrhythms and call and answer vocals get a modern dancefloor makeover in tracks by Bom Sone (African Unity & What A Life). Important is another artist who's work (Kaya Poucha, Origin) defies easy categorization, featuring a sonic mesh of complicated rhythms, organ and multi-layers of vocals.

There are 16 tracks in all, with lyrics are English, Susu, French. Other artists featured include Selecta fest. My Baby, Ruphert, Balbore, Symbole, Prince II Saen, Neuf Six and Kati.

The second disc, Roots Volume (release date TBA), will feature arrangements that share aspects of the

Mandeng musical traditions, from the powerful polyrhythms of the djembe to the soothing cyclical melodies of the balafon to the longing cries of the vocalist. Each instrument is rich with history and significance to Mandeng’s past.