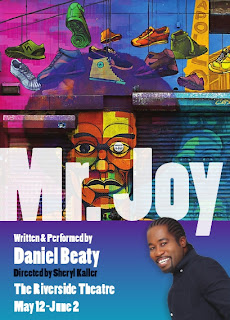 The Riverside Theatre is excited to announce that our first play of the 2012 season is a new play by Daniel Beaty - Mr. Joy!

Daniel Beaty, the multiple award-winning writer and performer of Emergency! and Through the Night is back, returning to the stage of The Riverside Theatre with his latest solo play, Mr. Joy.  In this new work, presented by Riverside Theatre and the New Heritage Theatre, Beaty brings back audiences’ favorite characters from Emergency! with new stories to tell along with a host of new characters for a limited three-week run from Saturday, May 12 to Saturday, June 2 at The Riverside Theatre, 91 Claremont Ave. (bet. 120th & 122nd Sts.), Morningside Heights. 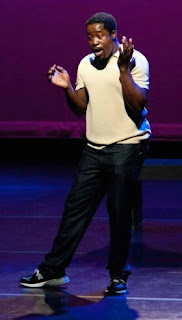 Directed by Tony Award nominee Sheryl Kaller (Next Fall), the play revolves around Mr. Joy, a Chinese American immigrant who has run a shoe shop in the heart of Harlem for the past 25 years when an unexpected occurrence causes several of his customers to reflect on the impact he has had on their lives through their shoes.  What has happened to this community’s joy and what will it take to reclaim it?  Showcasing Beaty’s signature blend of comedy, poetry, music and multi-character transformation, Mr. Joy is a hilarious and heart-warming exploration of one community’s journey to heal in order to dream again and discover boundless joy.

Originally named the Cloister Theatre, The Riverside Theatre — founded in 1960 and located at the historic Riverside Church — produces work that promotes and deepens cultural and social awareness.  Highlights from the previous seasons have included: the Katherine Dunham Tribute; the Clark Terry Tribute hosted by the late Ossie Davis, with special guests Bill Cosby, Arturo Sandoval, Dianne Reeves, Nicholas Payton and Jon Faddis; and the screening of The Rise & Fall of Jim Crow, in collaboration with Thirteen WNET. 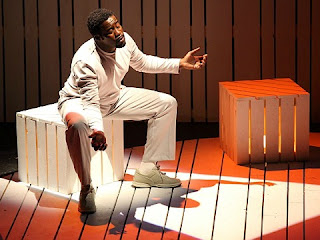