EnRoute Film Festival 2012 Call for Entries Open to May 31 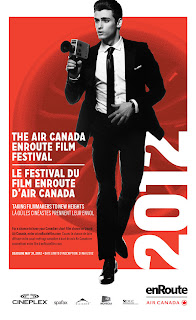 Toronto, ON – Air Canada is pleased to invite Canadian film students and emerging filmmakers to enter its sixth annual short film festival. Selected films will be broadcast on Air Canada’s personal in-flight seatback entertainment system as part of the Canadian Movie programming viewed by millions of Air Canada customers around the world.

In addition, a free public screening of the top films will be held in Vancouver, Montreal as well as in Toronto, where an awards celebration will follow to honour the winners. All screenings will take place in November.

• To download an entry form and view full contest rules and regulations, please visit  www.enroutefilm.com.
• Submissions will be accepted until Thursday, May 31.

One of last year's winners (in the Animation category):