NEW YORK CITY - Born in 1941, George Clinton is the principal architect of P-Funk. He was the mastermind of the bands Parliament and Funkadelic during the 1970s and early 1980s, and he is a solo funk 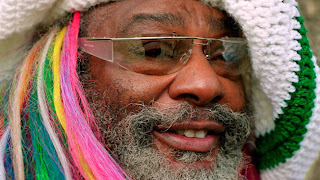 artist as of 1981. He has been called one of the most important innovators of funk music, next to James Brown and Sly Stone. Clinton is a member of the Rock and Roll Hall of Fame, inducted in 1997 with 15 other members of Parliament-Funkadelic.

The Parliaments began as a doo-wop group based in Plainfield, New Jersey, where Clinton grew up. The band eventually found success under the names Parliament and Funkadelic in the '70s. These two groups combined elements of musicians like Jimi Hendrix, Sly and the Family Stone, Cream, and James Brown, while exploring different sounds, technology, and lyricism. In 1982, Clinton signed to Capitol Records as a solo artist and as the P-Funk All-Stars, releasing Computer Games that same year. The disc featured the smash hits "Loopzilla" and "Atomic Dog." A string of successful albums and singles followed, including "Nubian Nut," "Last Dance," and "Do Fries Go with That Shake?" The Red Hot Chili Peppers also tapped

Though Clinton's popularity had waned by the mid-'80s, he experienced something of resurgence in the early '90s as many rappers cited him as an influence and began sampling his songs. The '90s and early '00s saw him releasing additional albums, reuniting with several old members of Parliament and Funkadelic, appearing in films, and collaborating with a variety of artists. In 2005, he also formed a record label called The C Kunspyruhzy. His latest solo album, titled George Clinton and His Gangsters of Love, came out in 2008 on Shanachie Records. The disc features guest appearances by Sly Stone, El DeBarge, Red Hot Chili Peppers, RZA, Carlos Santana, and more. These days, Clinton and Parliament Funkadelic tour 200 days out of the year in Europe, Asia, Africa, and the U.S. With multiple projects in the works, the master is still on top of his game. "I ain't going nowhere," he declares. "I feel like I'm starting over right now ... for real!"