TORONTO, ON – Harbourfront Centre is pleased to announce the first details of the 2012 Summer Festival season, in which over twenty festivals and events bring “The World in One Place.”

Between May and October, hundreds of artists of all stripes unite at more than twenty FREE festivals and events taking place at the heart of Toronto’s waterfront. Join us in celebrating local and international cultural communities through film screenings, art exhibitions, culinary events, live music, theatre and more! 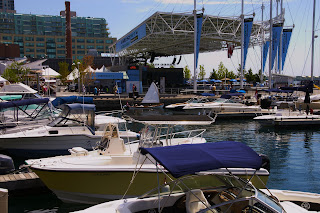 TD Toronto Jazz Festival, June 22 - July 1
One of North America's premier jazz festivals! The festival has become a destination event, not just for music lovers but for some of the greatest jazz celebrities in the world.

Canada Day: Going Global presented by CIBC, June 29-July 2
Live music includes: A rare Toronto date from indie-pop stars The Hidden Cameras; the Western-pop-meets-Zulu-rhythms of Johnny Clegg; electro-hip-hop genre-mashers The Airplane Boys
The finalists in the “O Canada” Singing Competition
B-Boy and B-Girl dance competition The Call Out
Come Dance with Me Canada unleashes the power of the collective

Expressions of Brazil, co-produced by Southern Mirrors and Puente July 6-8
Live music includes: Brothers of Brazil, a duo mixing bossa nova, samba, rock, funk and more; and Maria Bonita and The Band, performing Forró music, a mix of European and African traditions
Flicks for all ages in the Brazilian Festival of Film & TV Family Film Series

TELUS TAIWANfest, Aug 24-26
The O-Kai Singers’ brand of a capella invokes the group’s aboriginal roots
Dance Works combine traditional Taiwanese culture with tap dance for the performance of Daydreamers+
The delicious search is on for The King of Stewing

CaribbeanTales Annual Film Festival, September 4-15
Canada's one and only forum showcasing the best of Caribbean cinema, at home and abroad, classical and creole, digital and celluloid.

Tet Trung Thu Vietnamese Lantern Festival presented by CIBC, co-produced by the Vietnamese Women's Association of Toronto, Sept 15
The Ao Dai Competition showcases the best traditional dresses in an exhilarating fashion show
Enjoy a cup of tea and sample a variety of traditional treats at the Mooncake Tasting
Join in the magic of the celebration by making your own paper lanterns

HarbourKIDS: Folk, Oct 6-8
Great family-friendly programming to end the summer with a bang

Free Flicks, Wednesdays, July 4-Aug. 29, 9 p.m.
From classic film to cult comedy, we explore the journey of the underdog from zero to hero on the big screen, under the stars. 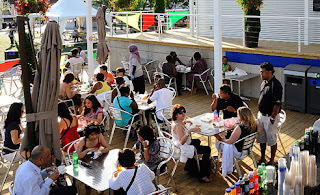 Harbourfront Centre Street Stage, weekends from Victoria Day to Thanksgiving, 9 a.m.-11p.m.
Come and see some of the best street performers this city has to offer!

Canoe Rides on the Natrel® Pond (Daily, May-Oct)
Our famous canoe rides will be available at the Natrel® Pond all summer long! Take a break and enjoy a fun float beside our picturesque boardwalk.

• Image of the Westjet Stage by Tom Bilenky