"When can we expect the great revelation?"

The final show of Tarragon's 2011-2012 season, The Real World? is directed by the theatre's Artistic Director Richard Rose and previews from April 24, opens May 2 and closes June 3, 2012 in Tarragon Theatre's Mainspace. Tickets range from $20-$51 (inclusive of HST) and are available by calling the box office at 416.531.1827 or by visiting www.tarragontheatre.com 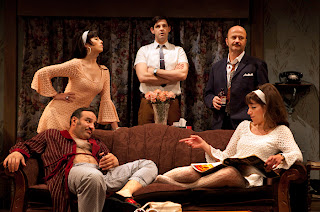 The mother of a precocious young playwright takes issue with his latest play: not only does it put private family matters centre stage, it liberally blends fiction with truth. Should or can playwrights truly "write what they know"? If they use their family members as characters in a play, what happens when those family members object to their theatrical selves? A play within a play, The Real World? remains a groundbreaking work about art, autobiography and authority.

Michel Tremblay has been a dominant figure in Québec theatre since the late 1960s; his plays have been performed around the world. Tarragon has been home to many of his English-language premieres: it has produced 13 of his plays, 10 of which were English-language premieres including - as well as The Real World? - Hosanna, Les Belles-Soeurs and Albertine in Five Times. Tarragon is reviving this Canadian classic nearly 25 years after it premiered in English at Tarragon in 1988.