TORONTO – In May of 2012, Toronto music venue Lula Lounge turns 10 years old. Defying all odds, Lula is still going strong after a decade of presenting the best of local and global artists of every genre. So to

mark the occasion, Lula has planned a full slate of expansive activities throughout the rest of this year. For more information please visit

Lula Lounge has grown from humble beginnings as a Latin/Brazilian place to what is now Toronto's quintessential home to extraordinary music of all genres. This hotbed of talent has hosted such varied and well-respected international artists as Norah Jones, John Cale and Eliadas Ochoa. Lula has also encouraged the development of many Canadian musicians who have gone on to gain worldwide recognition like Hilario Duran, Amanda Martinez, Autorickshaw and Alex Cuba. Having presented almost every genre (and cross-pollinated genre) of music including folk, country, rock, hip-hop, pop and even classical, the club boasts a wide range of past performers including Feist, Broken Social Scene, Jim Cuddy and Carl Palmer. Over the years Lula has partnered extensively with

The annual LULAWORLD FESTIVAL is the main avenue for Lula to showcase the very best in both foreign and domestic world music artists. This May, Lulaworld 2012 will prove no exception, featuring hot local musicians alongside those hailing from Brazil, Cuba, the U.S and 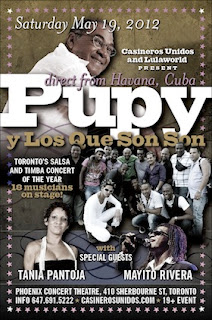 The anniversary celebrations also include a compilation CD, SÍ CANADA, that will highlight the work of Canada's vibrant salsa scene. With profits going to support the visionary local charity Dancing with Alzheimers, the album aims to increase the international profile of top Canadian Latin musicians. Contributors to the album, named after a song by Mario Allende, will include Roberto Linares Brown, Caché, Son Aché, Hilario Duran and other artists to be confirmed.

In other exciting news for this year, Lula will be expanding the vision and reach of its non-profit organization, the LULA MUSIC AND ARTS CENTRE (LMAC). It will continue to focus on offering music that might not otherwise have an audience; for example LMAC presents a weekly salsa series and delivers programs for intermediate and 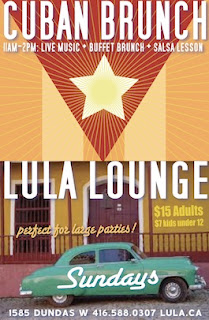 secondary school music, dance and language students. It will also feature many world-music and dance-related workshops (Son Jarocho, Colombian Percussion, Cuban Dance) this May, along with the annual Lulaworld Festival concerts.

In preparation for the 10th year events, the club has also enjoyed a facelift that includes new signage, tiling, windows and doors. Owner José Nieves felt that the venue needed a fresh look as it embarks on its second decade.

In addition to all of its musical pursuits, Lula also provides a unique dining experience; decidedly international cuisine with a Latino soul. Concertgoers often dine and enjoy a cocktail or a glass of wine while taking in the shows, a combination that receives rave reviews.
latin music live music in toronto lula lounge toronto world music