Toronto - The Toronto Alliance for the Performing Arts (TAPA) proudly announces that the 33rd annual Dora Mavor Moore Awards, celebrating extraordinary Toronto talent in the performing arts, will take place on Monday, June 25 at 8pm at the St.Lawrence Centre for the Arts in the Bluma Appel

The awards will be hosted by Dora-nominated actor and current Shaw Festival star of Ragtime, Thom Allison who just finished a year-long run on Broadway with the musical Priscilla, Queen of the Desert. Playwright and actor Chris Earle returns for his second time to pen the show, while Sandra Lefrançois returns for a third time to direct. Acclaimed musical director Glenn Morley also returns for his third time. Lighting is by nine-time Dora winner Andrea Lundy who returns for her eleventh consecutive year.

The pre-show reception will be held at the well-appointed Lower Lobby of the Sony Centre for the Performing Arts and features a Red Carpet outside the entrance where guests will be given star treatment as they arrive for this glamorous cocktail reception, greeted by the marvelous award-winning stage, screen and radio veteran Elley-Ray Hennessy, and Dora-nominated Colin Doyle (2008 & 2010 NOW Magazine "Artist to Watch"). The Red Carpet runs from 6:30pm-7:30pm. The always fabulous After-Party will, for the third year in a row, take place under the stars and transform Front Street into a giant street party in front of the theatre.

Thom Allison is currently at the Shaw Festival, starring as Coalhouse Walker Jr. in Ragtime. Allison has just finished a year-long run of his Broadway debut in Priscilla, Queen of the Desert.  He was in the original Canadian companies of Miss Saigon, The Who's Tommy and Rent. He has been nominated 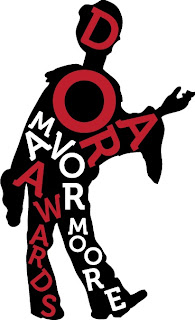 for two Dora Awards (Toronto), two Betty Awards (Calgary), a Jessie Award (Vancouver), an Ovation Award (Vancouver) and a Sterling Award (Edmonton). At The Stratford Festival, Allison has appeared in Romeo and Juliet, Pericles, My Fair Lady, Threepenny Opera, The King and I, King Henry VIII and the much-heralded Stratford Festival production of Into the Woods as Cinderella's Prince/Wolf. At the Shaw Festival, he has been seen in Wonderful Town, A Little Night Music and Follies: In Concert.

The Doras are named for Dora Mavor Moore (1888 - 1979), a well-loved teacher and director who helped establish Canadian professional theatre in the 1930s and 1940s. Recognizing the outstanding achievements in Toronto's performing arts industry, the Doras honour the creators of over 200 theatre, dance and opera productions annually in the following Divisions: General Theatre, Independent Theatre, Musical Theatre, Dance, Opera and Theatre for Young Audiences.

The Dora Mavor Moore Awards are administered by the Toronto Alliance for the Performing Arts (TAPA). In addition to the Doras, other programs and services provided by TAPA include: T.O. TIX - Toronto's Official One Stop Ticket Shop at Yonge-Dundas Square and online at www.totix.ca; Toronto's official Theatre Guide; hipTIX, offering $5 tickets to students between the ages of 15 and 29; citySPECIAL; the Commercial Theatre Development Fund; and the Travel Retreat Initiatives Program - TRIP. For more information visit www.tapa.ca and www.totix.ca.