Singer-songwriter Arieb Azhar learned music playing guitar as a Karachi teenager and found his voice, drifting disillusioned from crumbling Soviet Minsk to the streets of war-torn Zagreb, where he discovered the deep currents of Sufi poetry and songs of Irish resistance and Roma delight. It’s a 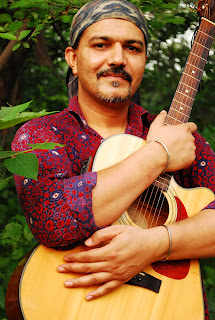 voice poised to start a meaningful conversation between Americans and Pakistanis.

“Traditional, popular music in Pakistan is very, very profound,” Azhar explains. “It’s not folkloric music; it’s alive and part of the culture. The content these folk musicians used to sing about—and that I try to sing about—draws on our collective cultural wisdom. It’s based on very human values that transcend religion and race.”

Azhar, after returning to Islamabad, crafted a sonic world of his own, transforming the strikingly philosophical 19th-century poetry of Sufi devotees with worldly arrangements that range from rootsy guitar lines to soaring sweeps of vocal ecstasy. With the driving power of both rock and qawwali (Pakistan’s globally-savored Muslim devotional music), Azhar’s songs have a delicacy and atmospheric texture that flow from his long stint as a busker and pub player in Eastern Europe.

”I have realized that God/Nature has created all human beings the same. With their hopes, fears, and aspirations,” says Azhar. “The differences of language, culture, politics, and mainstream religion came afterwards and become irrelevant wherever they begin to divide humanity instead of connecting it. Genuine music can always act as the healing force to reconnect us on a human level.”

Azhar’s resonant, rich voice will intertwine with guitars, folk flutes, and tablas, for an acoustic, uplifting evening of globally informed music and a very personal kind of diplomacy in June and July 2012 as part of Center StageSM (www.centerstageUS.org).

An initiative of the U.S. Department of State’s Bureau of Educational and Cultural Affairs, Center Stage brings compelling contemporary artists from Haiti, Indonesia, and Pakistan to the United States to engage the American people in cultural diplomacy as a way to create opportunities for greater understanding. Administered by the New England Foundation for the Arts, with funding from the Asian Cultural Council, the Robert Sterling Clark Foundation, and the Doris Duke Foundation for Islamic Art, this public-private partnership is the largest public diplomacy effort to bring foreign artists to American stages in recent history. 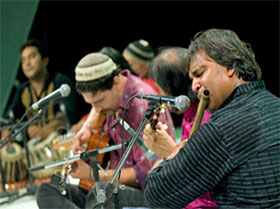 June 26, 2012
River to River Festival
A lunch time performance and talk at LentSpace