Caribbean: Crossroads of the World at the Studio Museum Harlem to Oct 21 2012 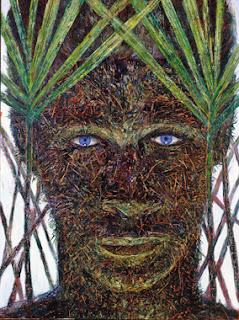 • In conjunction with the Queens Museum of Art & El Museo del Barrio (where it's on view to January 3, 2013)
• Visitors who purchase one admission at any of the above venues will be issued a CARIBBEAN PASSPORT, which grants its holder access to free admission at the other two venues during the duration of the exhibition.

NEW YORK CITY - This show, housed at three NYC museums, explores Caribbean art in various aspects, including Shades of History and Land of the Outlaw, the two I saw at the Studio Museum. Shades of History examines the region's history from the Haitian Revolution (1791 - 1804) to the present day - an evolution leading to the prominence of Africans in the region. Land of the Outlaw looks at the notions of Caribbean utopia vs. the site of illicit activity.

The show includes paintings, photography and sculpture and a diorama by GCP (Gerrit) Schouten (1779-1813). What I found striking was the contrast between the neo-Romantic depictions of slaves and others by European artists vs. the vibrant Africanism of indigenous artists, particularly in the modern era like Kapo-Malica Reynolds wooden sculpture Seven Brothers (1966). Han Willis Thomas piece Ode to CMB Am I not a man and brother is a stunning 24K gold and rhinestone pendant necklace made in 2006-7 of an African male bust. Iconic images of the natural world were common, and some were retakes of classic European works, like René Peña's Black Marat (2009) a photographic redux of Jacques-Louis David's famous painting. 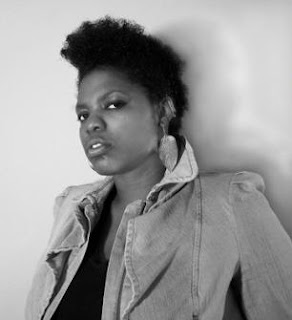 A Q&A with Jamaican artist Ebony J. Patterson, one of the many artists represented in the show, gave some insight into her artistic process and preoccupations. Her work looks at beauty, gender and the grotesque, and she discussed its evolution from the autobiographical pieces of grad school to outwardly focused work with masculine subjects chiefly in the context of dancehall. "How do these man craft their masculinity?" she wondered.

The fad for skin lightening and the notion of metrosexuality, of men wearing make-up, embellishment and bling, in a homophobic environment are recurring themes and make for compelling pieces. Skin lightening, over time, causes the outer layers of the skin to deteriorate. "The meatiness comes through," she noted, and is depicted in her earlier work as florid and flowery, in pinks and reds. She uses photography as a point of reference, and early male images were taken from mug shots. The decorated male images examine sexual politics - there is homophobia but also skin transformation and metrosexual transformation. The Disciplez series presents haloed figures taken from images of criminals, a subset in her ongoing Gangsters for Life series. It's prettiness as an expression of masculinity, pushing feminine elements without entirely losing their masculine nature. "It's ironic that the feminine is being used to reinvent the masculine," she noted. The images are embellished and hand decorated, with patterned elements in the background and some 3-dimensionality. Cinder blocks painted pink are a recurring element. Dancehall itself is about theatrics and performance, and her interest is in the preparation for the event. There is a need for excess in dancehall, or to show how you can access that excess. 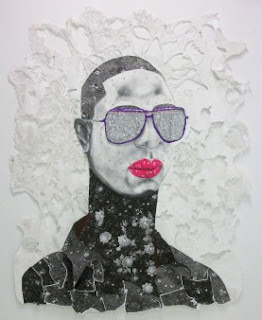 Over time, her figures evolved to a white face look - like a reverse minstrel show, and then to a shiny, blinged out effect. While based in photography, her work really only begins there. "I'm not at the point where I can let the photograph just be," she said. Some are photo tapestries, beginning with a photograph which is then sent to a company that actually weaves the image into fabric. She then hand embellishes the results, inspired in part by Haitian drapeaux. "My work isn't shiny enough!" she laughed. It plays with notions of visibility, of who is visible at a national or personal level.

A 2010 project was a blinged out car - a Fiat with hand cut elements (like stencils) decorated in glitter pink and set on a floral pedestal. (From 2010 - Cultural Soliloquy I - cultural object revised.) She acknowledged some similarities in theme to African artists, i.e. the use of patterned surfaces and decorative elements. "We have the need to decorate. It's part of who we are," she said.

In her current work - including a current show in Trinidad - she's removed the figures and left only the costumes and embellishment, bringing her earlier tapestries to 3-dimensional life. "Without the person's presence, how do objects tell us about gender?" she wonders. Other recent pieces include an installation completed last year during a residency in Trinidad at Alice Yard. During her two week stay, she made a decorated coffin every day for the people who were murdered while she was there. Embellished with fabric and flowers, they make a compelling statement.

The exhibition Caribbean: Crossroads of the World is the culmination of nearly a decade of collaborative research and scholarship organized by El Museo del Barrio in conjunction with the Queens Museum of Art and The Studio Museum in Harlem. 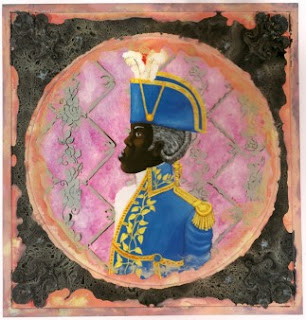