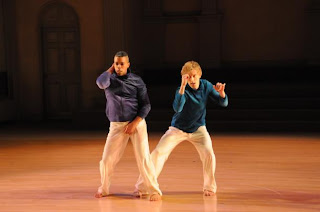 "Different in age (by almost twenty years), race, body type and sexual orientation, Strimpel seems to have absorbed and enhanced the qualities that have always been wildly magnetic about Leichter--an elastic body nevertheless given to delivering rapid, sharp, percussive language, the entire body as speech and gesture." -Eva Yaa Asantewaa, Infinite Body

"While with his idiosyncratic facial expressions and almost exhibitionist performance style, it is expected that Leichter performs his own work fabulously, Bryan Strimpel who is white, was absolutely incredible in the smoky funkiness of his dancing." -Carl Paris, Parallels Writer in Residence